England would be a confident outfit heading into this match while Sri Lanka would hope they turn up with an improved performance to level the series. 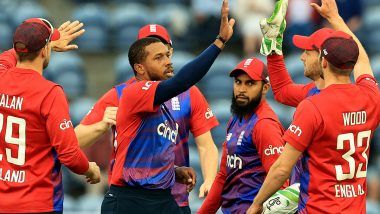 After defeating Sri Lanka comprehensively in the first T20I, England would be looking to continue with their winning momentum when they face Sri Lanka in the second game of the three-match series, on Thursday. The match would be played at the Sophia Gardens in Cardiff. It was the English batsmen who turned up to clinch the tie for them. Sam Curran and Adil Rashid starred at first with two wickets each, restricting the visitors to just 129/7. Jos Buttler then came out and showed why he was such a highly rated player in this format with a 68-run unbeaten knock. The world number one T20 side would hope to wrap up the three-match series by winning this fixture. Eoin Morgan, Jos Buttler Could Land in Trouble for Old Tweets, ECB Reportedly Starts Investigation as the Two Cricketers Allegedly Mock Indians

Sri Lanka would have plenty of work to do, heading into this game. Much is expected of captain Kusal Perera, Kushal Mendis and Wanindu Hasaranga and they would have to lead from the front. Sri Lanka would take consolation from Dasun Shanaka's 50-run knock which was the only bright spot for them in this match.

England vs Sri Lanka 2nd T20I, Match Time and Venue as per IST

England vs Sri Lanka 2nd T20I match will be played at the Sophia Gardens in Cardiff. The game is scheduled to be held on June 24, 2021 (Wednesday) and will begin at 11:00 pm IST (Indian Standard Time).

Where To Watch Live Telecast of England vs Sri Lanka 2nd T20I, Match in India

(The above story first appeared on LatestLY on Jun 24, 2021 04:35 PM IST. For more news and updates on politics, world, sports, entertainment and lifestyle, log on to our website latestly.com).