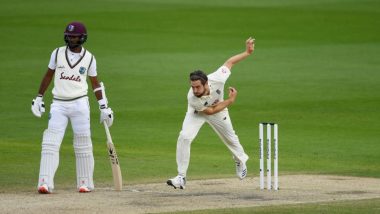 After some mind-boggling contest in the first two matches of the series, England and West Indies are set to lock horns in the decider. ENG vs WI 3rd Test match is scheduled to be played at the Old Trafford in Manchester and will get underway on Friday (July 24). Stakes will be very high in the encounter as West Indies have a golden opportunity to defeat England at their own backyard. On the other hand, Joe Root and Co will not want to mark their home season with a defeat. Meanwhile, Dream11 fans can scroll down to get the best tips to choose batsmen, bowlers, wicket-keepers and all-rounders for ENG vs WI 3rd Test 2020. Jofra Archer Would Want to Play the Series Decider, Says James Anderson.

Courtesy a fantastic 95-run knock by Jermaine Blackwood, West Indies won the opening game of the series by four wickets. However, tables were turned around in the second game as England registered a 113-run triumph and levelled the series 1-1. It was Ben Stokes who proved to be a nemesis for the visitors in the preceding match and the all-rounder must be aiming to replicate his heroics. Unfortunately, however, just like the first two games, the final encounter is also expected to get affected by rain. Hence, fans will have to keep their fingers crossed. Now, let’s look at the best dream11 team for the game. Ben Stokes Likely To Be Rested From England Playing XI for 3rd Test vs West Indies

ENG vs WI – Dream11 Team Prediction - Wicket-keepers: Despite bagging a pair in the last game, Shane Dowrich (WI) is the only wicket-keeper who has showcased some resilience in the series. Hence, he should be picked in your dream11 team.

Ben Stokes (ENG), who is enjoying the form of his life, should undoubtedly be named the captain of your team while his counterpart Jason Holder (WI) can fill the vice-captain slot.

(The above story first appeared on LatestLY on Jul 23, 2020 08:44 AM IST. For more news and updates on politics, world, sports, entertainment and lifestyle, log on to our website latestly.com).