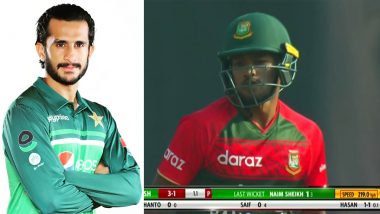 Hassan Ali had an exceptional performance against Bangladesh in the first T20I between the two teams as the Babar Azam-led side came out on top. The Pakistan pacer finished with a spell of 3/22 in his quota of four overs but in addition shocked the world, when he clocked 219kmph on the speed gun in his very first over of the game, thus breaking the record of fastest delivery in a cricket match. Hassan Ali Opens Up After Dropped Catch in Pakistan vs Australia T20 World Cup 2021 Semifinal, Writes, ‘Don’t Change Your Expectations From Me’ (Check Post).

Hassan Ali had a disappointing world cup campaign and was subjected to abuse online after his dropped catch against Australia in the semis. However, the pacer bounced back brilliantly in his very first game following that, where he seemingly broke Shoaib Akhtar’s record of bowling the quickest ball in cricketing history.

Hassan Ali 219 km/hr or 136.1 mph on the speed gun in the game’s second over but it was later revealed that the figures appeared due to a technical error. Hence, the record of the fastest ball in Cricket still remains with former Pakistan pacer Shoaib Akhtar, who had clocked 161 kmph against New Zealand in 2002.

However, speaking of the game, Pakistan were the dominant side as their bowlers restricted Bangladesh to a below-par score of 127 runs. However, it wasn’t all easy going for Babar Azam’s men as they were tested to the limit by the hosts, reaching the target in the final over of the game.

No, it was a technical error as there was an issue with the speed gun

(The above story first appeared on LatestLY on Nov 20, 2021 04:56 PM IST. For more news and updates on politics, world, sports, entertainment and lifestyle, log on to our website latestly.com).