With just one defeat all season, Hardik Pandya has led Gujarat Titans brilliantly to hit astonishing consistency. Opponents Punjab Kings lost to Lucknow Super Giants in the previous match which was a setback for them. 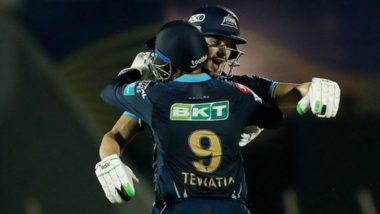 League leaders Gujrat Titans take on the Punjab Kings at the DY Patil Stadium on May 03, 2022 (Tuesday) at 07:30 PM IST with the former in fine form. With just one defeat all season, Hardik Pandya has led this team brilliantly to hit astonishing consistency. There is never a moment in the game when the Gujrat Titans’ squad does not believe they are out of the tie. Time and again, one player of the other has stood up and raised his game under pressure which goes to show cricket is a team game after all. Opponents Punjab Kings lost to Lucknow Super Giants in the previous match which was a setback for them. They need a few wins to climb up the ladder and create pressure on this above them. IPL 2022 Points Table Updated With NRR.

Hardik Pandya has been the star performer for Gujrat Titans with constant big scores with the bat. The Indian all-rounder has looked like his usual self this season and a change of franchisee has worked well for him. David Miller and Rahul Tewatia in the lower order have expertise in successful run chases and Punjab will be wary of the threat possessed by the duo. GT vs PBKS Preview.

The problem for Punjab Kings has been the inconsistency of the opening pair of Shikhar Dhawan and skipper Mayank Agarwal. The team management could freshen things up by promoting Jonny Bairstow to open the innings. Kagiso Rabada was expensive in the last match but ended up picking four wickets which should give him a lot of confidence.

Those unable to watch the GT vs RCB match live on television can follow the game online. Disney+ Hotstar will be live streaming the Gujarat Titans vs Royal Challengers Bangalore match online for its fans in India. Fans, however, need to subscribe to Hotstar by paying a nominal subscription fee.

(The above story first appeared on LatestLY on May 03, 2022 12:36 PM IST. For more news and updates on politics, world, sports, entertainment and lifestyle, log on to our website latestly.com).