Both Gujarat and Rajasthan were very much consistent throughout the season and thus ended on first and second place on the points table. Fittingly, the two sides will now face-off for the title. The Gujarat Titans vs Rajasthan Royals IPL 2022 final will be live telecast on Star Sports channels. 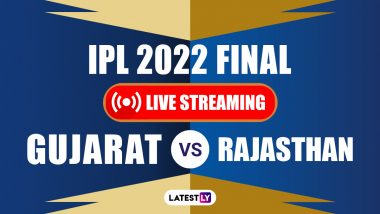 An exciting Indian Premier League (IPL) season is coming to an end. Newcomers Gujarat Titans (GT) have been outstanding throughout the season and find themselves in the final and one win away from title triumph. Their opponents for this summit clash are inaugural champions Rajasthan Royals, who made it to the final for the first time in 14 years. At the Narendra Modi Stadium, an exciting IPL 2022 finale is on cards which will be preceded by the closing ceremony. Meanwhile, if you are looking GT vs RR IPL 2022 final live streaming online and TV telecast details. IPL 2022 Closing Ceremony Live Streaming Online and TV Telecast, Bollywood Performers List, Time and All You Need to Know.

Both Gujarat and Rajasthan were very much consistent throughout the season and thus ended on first and second place on the points table. Fittingly, the two sides will now face-off for the title. Interestingly, in two meetings between these two sides, Gujarat Titans emerged victorious on both the occasions. It will be interesting to see if they hold the pressure in the all-important final. Rajasthan Royals have one slight advantage as they faced Royal challengers Bangalore (RCB) at the same venue in the Qualifier 2. For Gujarat Titans, it is the first outing of the season in Ahmedabad, their home venue. GT vs RR Preview: Likely Playing XIs, Key Battles, Head to Head and Other Things You Need To Know About TATA IPL 2022 Final.

Those unable to watch the GT vs RR match live on television can follow the game online. Disney+ Hotstar will be live streaming the Gujarat Titans vs Rajasthan Royals match online for its fans in India. Fans, however, need to subscribe to Hotstar by paying a nominal subscription fee.

(The above story first appeared on LatestLY on May 29, 2022 12:54 PM IST. For more news and updates on politics, world, sports, entertainment and lifestyle, log on to our website latestly.com).