A day after guiding India to a sensational victory over England, Krunal Pandya celebrates his 30th birthday on Wednesday (March 24), and wishes are pouring in from worldwide. The southpaw introduced himself in ODI cricket with a staggering knock on debut. 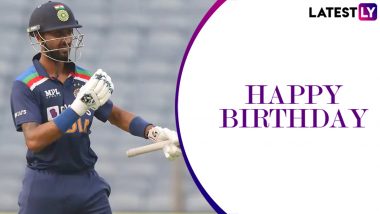 A day after guiding India to a sensational victory over England, Krunal Pandya celebrates his 30th birthday on Wednesday (March 24), and wishes are pouring in from worldwide. The southpaw introduced himself in ODI cricket with a staggering knock on debut. Coming to bat at number seven in the opening ODI at the Maharastra Cricket Association Stadium in Pune, Krunal made a mockery of the England bowlers and smashed a fifty off 26 balls, the fastest for any debutant in ODI cricket history. Riding on his brilliance, the Men in Blue posted 317/5 while batting first and eventually won the game by 66 runs. The left-arm spinner also scalped a crucial wicket. Hardik Pandya Pens Heartfelt Note as Brother Krunal Celebrates 30th Birthday.

It was indeed an emotional moment for Krunal as he lost his father a couple of months ago. He dedicated his match-winning effort to his father and even broke down while talking on Live TV. Netizens hailed the senior Pandya for his gesture, and as the all-rounder turned 30, social media got flooded with wishes. While his younger brother Hardik penned a heartfelt note, Yuvraj Singh and Dinesh Karthik also extended wishes for Krunal. Have a look!

We’re on this journey together bhai right from the start ❤️ The highs, the lows, I’m lucky to have you by my side. Happy birthday big bro 🤗 @krunalpandya24 pic.twitter.com/FpghfOkwvC

Happy birthday @krunalpandya24! Congratulations on a dream debut 🇮🇳 Keep working hard and have a great year ahead! 👍🏻

and how they've gone from strength to strength post January when they met with a debacle.

Much love brothers, and a very happy birthday to you @krunalpandya24

Happy birthday, Krunal! Wishing you all the luck and success 🎉

Thanks for the treat that you gave us with the bat a few hours ago 🥳💙#OneFamily #MumbaiIndians @krunalpandya24 pic.twitter.com/dujGD8H9lj

Meanwhile, India earned a 1-0 lead in the three-match series after winning the first ODI. Hence, a win in the second game would seal the deal for them. However, the home team can miss services of Shreyas Iyer, who dislocated his shoulder while fielding. On the other hand, the next contest, taking place on Friday (March 25), would be a do-or-die encounter for the Three Lions, and they should come all guns blazing.

(The above story first appeared on LatestLY on Mar 24, 2021 12:58 PM IST. For more news and updates on politics, world, sports, entertainment and lifestyle, log on to our website latestly.com).