Former Sri Lankan captain Mahela Jayawardene turns 43 today. Jayawardene was born on May 27, 1977 in Colombo Sri Lanka. Jayawardene went on to become one of the greatest batsman in Sri Lanka and world as well. The right-handed batsman made his Test debut against India in 1997 and then year late he played his first ODI against Zimbabwe. 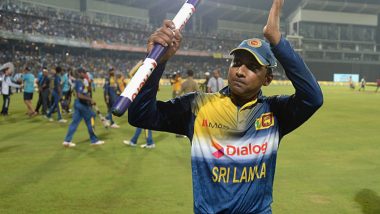 In 2006 Jayawardene was awarded the ICC ‘captain of the year’ and captain of the ‘world one-day international team of the year’. As the former Sri Lankan skipper turns 43, Twitterati celebrate his birthday. Here are some of the posts. Mahela Jayawardene Questions Need to Build Largest Cricket Stadium in Sri Lanka's Homagama.

How good was this one against New Zealand in the 2007 semi-final! pic.twitter.com/gu7yOvlrKL

(The above story first appeared on LatestLY on May 27, 2020 05:41 PM IST. For more news and updates on politics, world, sports, entertainment and lifestyle, log on to our website latestly.com).