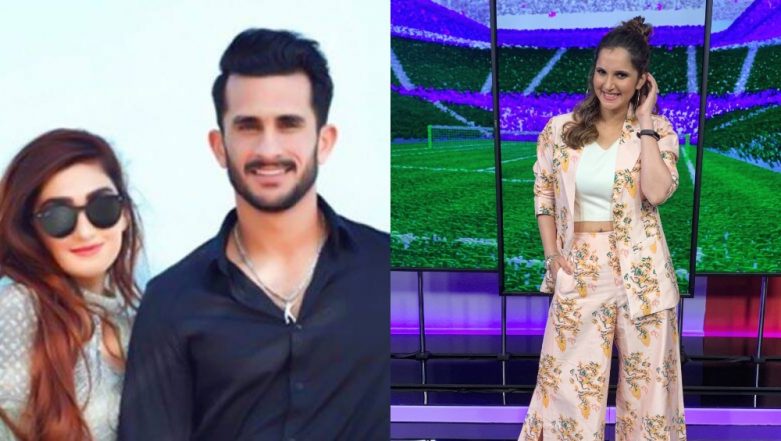 Pakistani international cricketer Hasan Ali was congratulated by Indian Tennis star Sania Mirza ahead of his wedding to Dubai based Indian woman Shamia Arzoo. Ali, who played four games for Pakistan in the recently concluded ICC Cricket World Cup 2019, shared a picture captioned “last night as a bachelor” before his wedding night. The 25-year-old cricketer is set to tie the knot with Shamia on August 20, 2019 (Tuesday) in Dubai. Shamia as per reports works is a flight engineer with the Emirates Airlines. Hasan Ali and Samiya Aarzoo Pre-Wedding Photoshoot Pics OUT! Pakistani Cricketer All Set to Marry Indian Girl in Dubai.

Wishes flocked in numbers for the Pakistani all-rounder after his “bachelor” tweet with many also trolling the cricketer for his post. Among the many well-wishers was also Indian Tennis player Sania Mirza, who congratulated Ali and wished him happiness for the life ahead. The three-time Grand Slam champion also cheekily informed Ali that “this time you’ll have to treat us to more than Nandos.”

Congratulations Hassan ❤️ wish you both a lifetime of love and happiness .. this time you’ll have to treat us to more than Nandos though 😅😅 https://t.co/CEXysWNv4F

Earlier, there was a lot of speculations surrounding Ali’s marriage to Shamia with many reports claiming that the Pakistani cricketer was set to tie the knot with an Indian woman. The player himself has to later release a statement to shush all rumours.  He eventually confirmed it through an announcement.

“Our families wanted to keep this a low key affair but since the matter has come out in the media I have decided to make an official announcement to ensure there are no speculations surrounding my marriage," said Hasan at a press conference in his hometown, Gujranwala in Pakistan.

Shamia's father Liaquat Ali is said to be former Block Development and Panchayat Officer (BPDO). Samia herself has a B.Tech (Aeronautical) degree from Manav Rachna University and is a former employee of Jet Airways.