IND vs ENG 5th Test 2022 Preview: Likely Playing XIs, Key Battles, Head to Head and Other Things You Need To Know About India vs England Cricket Match in Birmingham

The visitors enter this match with a 2-1 series, something that is of huge advantage, given the fact that they cannot lose the five-match affair. Despite the lead, India would aim to go all out for a win against a rejuvenated English Test outfit under new leadership of Brendon McCullum and Ben Stokes. 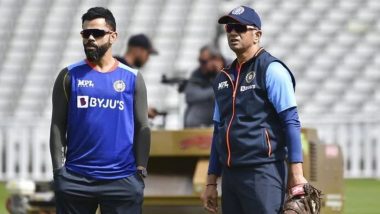 After a year's wait, India and England would finally be able to write the ending note of a terrific Test series, that had begun in June 2021. The hosts engaged in a quality contest with Virat Kohli's fierce team but the five-match affair was unable to be completed following a COVID-19 scare in the Indian camp. However, back after a year, both teams are raring to go and end the series on a high. A lot has changed in the past year for both teams. They now have new captains and new coaching staff as well. For England, Brendon McCullum's appointment as Test head coach has seemed to reap instant rewards with Ben Stokes' side clinching a 3-0 whitewash over World Test Champions New Zealand. Virat Kohli Asks Cameraman, ‘What’s Up’ While Leaving Edgbaston Training Ground (Watch Video)

For India, Rahul Dravid is in charge at the helm of affairs with Rohit Sharma as skipper. There remains a very big question mark on Sharma's availability for this crucial game with the Indian skipper testing positive for COVID-19 for a second time. It has been reported that Jasprit Bumrah would captain the side in Rohit's absence should the latter end up being unavailable for the game. Whoever leads the side, all eyes would once again be on Virat Kohli, who had skippered this team to a 2-1 lead in the series. Although he would be without the captain's blazer, there can not be a doubt that Kohli would bring his A-game and his leadership skills will once again come in very handy against a tough English side with a fresh approach. In the expected absence of Sharma, senior players like Kohli, Cheteshwar Pujara and also Hanuma Vihari would be important cogs in India's batting wheel.

If Rohit Sharma gets ruled out, Cheteshwar Pujara can be pushed to open the innings alongside Shubman Gill. Mayank Agarwal's vulnerability against the moving ball might work to his disadvantage in swinging conditions and he might not make the cut. Hanuma Vihari then would bat at number three, as he did in the Sri Lanka home series with Kohli at four and Shreyas Iyer at five. It would also be interesting to see if India decide to play both Ravi Ashwin and Ravindra Jadeja on this pitch. England on the other hand, will aim to keep that winning combination intact that fetched them the series win against New Zealand. India Likely Playing XI for 5th Test vs England: Check Predicted Indian 11 for IND vs ENG Cricket Match in Edgbaston

A draw would be enough for India to seal a memorable Test series win but the visitors would be eager on finishing things 3-1.

India and England have fared off for a total number of 130 times in Test cricket. England hold the upper hand easily with 49 wins while India have 31 to their name. A total of 50 games between these two sides have ended in draws.

Former skipper Virat Kohli and pace ace Jasprit Bumrah would be the key players for India in this Test. England on the other hand, would rely on the likes of Jonny Bairstow and also James Anderson to come good.

The much-talked-about Virat Kohli vs James Anderson duel would once again be one to watch out for. The other player duel, which can have an impact on the game would be the one between Jasprit Bumrah and Jonny Bairstow.

India vs England 5th Test match will be played at the Edgbaston Stadium in Edgbaston, Birmingham on July 1, 2022 (Friday). The 5th Test is scheduled to begin at 03:00 pm IST (Indian Standard Time). Toss will be held at 02:30 pm.

Fans can live telecast India vs England match live on Sony Sports channels. The IND vs ENG 5th Test match will be live telecast on Sony Six, Sony Ten 3 and Sony Ten 4. Fans looking for how to watch the IND vs ENG 5th Test live streaming online can watch the match live on the Sony Liv app as well as on the website. Fans watching the live streaming online on Sony Liv will have to pay a nominal fee and subscribe to catch the live-action.

(The above story first appeared on LatestLY on Jun 30, 2022 02:39 PM IST. For more news and updates on politics, world, sports, entertainment and lifestyle, log on to our website latestly.com).