New Zealand won the toss and opted to bowl first. Openers Rohit Sharma and Shubman Gill did well to deny New Zealand a wicket with the new ball and added 62 runs for the first wicket. However, Kyle Jamieson accounted for Rohit to help New Zealand make a comeback. 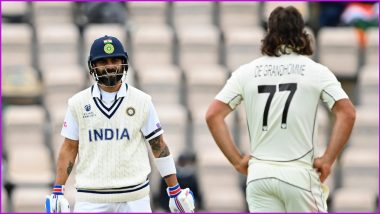 Virat Kohli and Ajinkya Rahane shared unbeaten 59-run stand for the fourth wicket before play was called off on day two of the ICC World Test Championship (WTC) between India and New Zealand in Southampton. Bad light forced early stumps as only 64.4 overs were possible on day two. The day one was completely washed-out due to rain. At stumps, Kohli was batting on 44 and Rahane on 29. India vs New Zealand ICC WTC Final 2021 Day 2 Highlights.

# The last time before today when Indian openers put up 50-plus runs' stand against NZ in Tests was in 2016, nine innings ago, in their second innings of Kanpur Test.

# Rohit Sharma is involved in each of the four 50-plus opening stands that India had during the World Test Championship.

# Trent Boult has dismissed Cheteshwar Pujara in three out of last four Test innings where both have played against each other.

# Virat Kohli has now scored 40-plus runs in eight out of his last 11 Test innings in England.

After losing three wickets, Kohli and Rahane helped India rebuild. Both the batsmen played some good quality shots to keep New Zealand bowlers at bay before bad light intervened on couple of occasions.

(The above story first appeared on LatestLY on Jun 20, 2021 12:12 AM IST. For more news and updates on politics, world, sports, entertainment and lifestyle, log on to our website latestly.com).