Kohli was ruled out of the match with a stiffness in the back and his deputy Rahane was suffering from a hamstring injury, from which he is expected to recover ahead of the Tests against England. 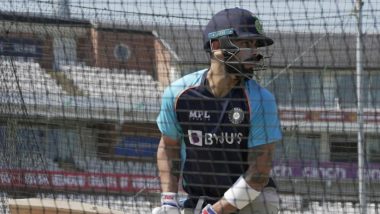 When India took the field against County Select XI, many might have anticipated to see Virat Kohli in action. Instead, he didn't come and Rohit Sharma was leading the squad in his place at the Chester-Le-Street in Durham. So why did Virat Kohli miss a chance to rehearse and get his form sorted before the much-anticipated Test series against England. The reason for this was later revealed by the Board of Control for Cricket in India (BCCI). The Indian cricket board later revealed that the Indian captain was actually suffering from a stiffness in the back and thus was ruled out of the practice match. A release by the BCCI stated, "Captain Virat Kohli felt some stiffness in his back on late Monday evening and he has been advised rest from the three-day first-class warm-up game by the BCCI Medical Team." India vs County Select XI: KL Rahul Scores Scores Hundred Against County Side in Warm-Up Match, Watch Video

Along with Kohli, vice-captain Ajinkya Rahane was also a significant absentee in the Indian squad. The 33-year old was suffering from a hamstring injury but he is expected to recover in time for the Tests against England. BCCI confirmed this as well in a statement which read, "Vice-captain Ajinkya Rahane has mild swelling around his left upper hamstring. This has been addressed by an injection. He is not available for the three-day first-class warm-up game. The BCCI Medical Team is monitoring him, and he is expected to fully recover well in time for the first Test against England starting from 4th August at Nottingham."

Young fast bowler Avesh Khan, who had turned up for County Select XI following the England Cricket Board's request to BCCI since two of their players were unavailable, also suffered a thumb injury. In the 35th over of the innings, a straight shot from Hanuma Vihari struck Khan right in his left thumb and he seemed to be in a lot of pain following that. He subsquently left the field to put an end to a bad day he had with the ball, where he kept on bowling full and short and got punished by the Indian batsmen.

(The above story first appeared on LatestLY on Jul 20, 2021 09:55 PM IST. For more news and updates on politics, world, sports, entertainment and lifestyle, log on to our website latestly.com).