Fans were left puzzled when they saw Avesh Khan and Washington Sundar play for County Select XI in their three-day warm-up match against India on Tuesday. Many of them took to Twitter to share their thoughts on this interesting development. 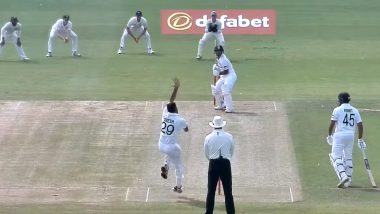 Indian bowlers Avesh Khan and Washington Sundar were seen playing for County Select XI against India in a three-day warm-up match on Tuesday and fans were left wondering as to why this has happened. Reports revealed that the Indian team wanted their reserves to get more exposure and match experience and hence these two players were seen featuring for County Select XI. It was also reported that though Khan and Sundar would play for the county side, they would head to the Indian dressing room during breaks. India vs County Select XI Practice Match: Avesh Khan, Washington Sundar Playing for County Side in Warm-Up Game

Some sources also reported that two players from County Select XI were unavailable. One had come in contact with a COVID-19 infected person while the other one sustained an injury. Fans were left in confusion and they took to Twitter to express their feelings.

What a time to be an Indian cricket fan! There are 24 players playing for India in an ODI and a FC game right now. And Kohli, Rahane, Ashwin, Ishant, Shami aren't in those 24. The depth is insane!

PS: We have so many players that two are even playing for the opposition😅 #SLvIND

Avesh Khan is playing for Durham, wait what? pic.twitter.com/nsRwnNwFI2

Avesh Khan is bowling for the County XI? Interesting.

Who can forget about this famous Golmaal meme?

Why and how is Avesh Khan playing for England?😂😂 pic.twitter.com/ml3szkAA49

Oh wow! Avesh Khan and Washi to bowl for county. This is nice. (No idea what to hashtag it as, but guess this will be that match thread)

Has Avesh Khan forgotten which team he’s playing for?

Wrong people at the wrong places:

(The above story first appeared on LatestLY on Jul 20, 2021 06:16 PM IST. For more news and updates on politics, world, sports, entertainment and lifestyle, log on to our website latestly.com).