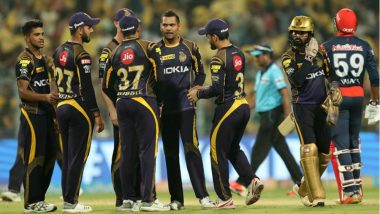 With the 2020 edition of the Indian Premier League (IPL) 2020 set to get underway on September 19, all the teams are gearing up to make a mark in the gala tournament. IPL 2020, however, will entirely take place in UAE due to the COVID-19 crisis in India. Earlier this month, BCCI asked the franchises to fly for UAE only after August 20 and the sides are wasting no time whatsoever. As per a report in The Telegraph, Kolkata Knight Riders (KKR) will reach Abu Dhabi on August 21 in order to get in the groove as soon as possible. IPL 2020 KKR Update: Dinesh Karthik Is the Leader at KKR, Says England’s Limited Overs Captain Eoin Morgan.

As per the news outlet, KKR will be flying out of Mumbai on August 20/21 and will be staying at The Ritz-Carlton Abu Dhabi, Grand Canal. The grand hotel is spread over 57 acres and KKR are expected to book the entire property as per the IPL norms. On reaching the venue, all the members of the squad will undergo a mandatory six-day quarantine process which will include three COVID-19 test matches. KKR Squad for IPL 2020 in UAE: Check Updated Players' List of Kolkata Knight Riders Team Led by Dinesh Karthik.

“Team members must be allotted rooms in a separate wing of the hotel that has a separate centralised air conditioning unit than the rest of the hotel,” according to the Standard Operating Procedures.

Earlier, it was announced that Mumbai Indians and Chennai Super Kings will also fly to UAE on August 21. Notably, CSK will practice for five days at the Chepauk Stadium before reaching Dubai while no such training session has been organized by the Mumbai Indians team.

(The above story first appeared on LatestLY on Aug 15, 2020 03:12 PM IST. For more news and updates on politics, world, sports, entertainment and lifestyle, log on to our website latestly.com).