IPL 2022: Moeen Ali Reveals the Struggles in His Cricket Journey, Says It Gives Him Goosebumps Even Today

Chennai Super Kings all-rounder Moeen Ali has revealed the struggles he had to go through in his cricketing journey, saying that the mere thought of the tough road he traversed gives him "goosebumps" today. 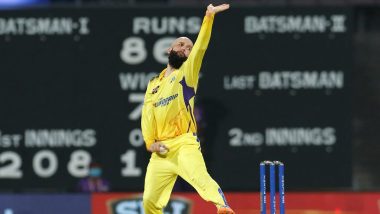 Mumbai, May 17: Chennai Super Kings all-rounder Moeen Ali has revealed the struggles he had to go through in his cricketing journey, saying that the mere thought of the tough road he traversed gives him "goosebumps" today. Following an extremely successful IPL 2021 season with CSK, where he played a key role in the Chennai franchise clinching its fourth title in the UAE, the England player, who quit Test cricket to prolong his white-ball career, has had a patchy IPL 2022. PBKS vs DC, IPL 2022: Rishabh Pant Happy With Back-to-Back Wins; Mayank Agarwal Left to Rue Batting Failure.

As the IPL 2022 season ended prematurely for the Mahendra Singh Dhoni-led side, Moeen reflected on the struggles he faced in his formative years and how determination and passion for the sport helped him overcome the hurdles. He revealed that his family didn't even have one Pound on some days to make ends meet, forcing them to survive on sandwiches or cucumber. "My dad had a huge passion for the game... him and as well as the twin brothers. Between the families, there were five of us, so my cousins played, I played my younger brother played. I just remember I was eight years old (when) I started playing with my brothers in the park, and I could feel that they were also getting better. So, then I took a trial when I was 19, and it was the first time that I ever played with a hard ball and stuff," the 34-year-old all-rounder said on CSK TV.

"That was the start and I was soon playing county cricket at a young age, doing well and loving the game. It was football, cricket, football, cricket. Cricket was my dad's passion and we just carried on," added Moeen. Moeen said that his father had to juggle between his work as a psychiatric nurse and taking the children for county games, adding that sometimes he could not afford petrol, and occasionally food. "At first, we were not very well off... we did not have a lot of money. My dad worked as a psychiatric nurse, which means you have to see people struggle mentally and stuff in the hospital. But at the same time, he had to take me and my brothers for county games, trials and training. He could not afford petrol; he could not afford sometimes, food. It was very difficult. Sometimes all three of us had a game the same day, a county game which was really unfortunate. We had one car, a terrible car between two families and so once the petrol and everything is done, we had just one pound left for the whole day. We had to get bread, sometimes cucumber and sandwich. PBKS vs DC, IPL 2022: Shardul Thakur, Axar Patel and Kuldeep Yadav Help Delhi Defeat Punjab by 17 Runs; Enter Top Four.

"That is the struggle... and it wasn't just my dad and uncle. It was my mum and aunt, them getting the clothes ready, making sure everything was on time. It was always a rush. Very, very difficult times, but the best times," added Moeen. "That was one of the many, many stories where financially we really struggled. My uncle and dad turned up selling chickens just to provide for the next game. I didn't even have my own pads at one point of time... I had to use my dad's friend's son's pads for trials. So, very difficult but amazing days. I became professional very early and things got better and better." On the cricket field, Moeen rose quickly, first starting as a seam-bowling all-rounder before taking to off-spin on the insistence of a coach. Back issues while bowling seam played a part in the decision.

"For me it was just the normal thing to play every day. I didn't know what it was to be a professional. I just thought this is life, I am playing every day, and my dad said, from 13 to 15, give me two years of your life. After school, we train, and we go outside in the park. Do whatever it takes. And after that, you do whatever you want. And that was the mindset that got me training everyday. "Our area where we were living, it was a very rough area, fighting and all. But I just wanted to play cricket. We were adamant we were going to make it and that is something that came from my dad, just try better than everybody. Not in an arrogant way, but just work harder than everybody else. Just thinking about it now makes me get goosebumps because you think where you come from and it is a great reminder for myself about my own humble background," added Moeen.

(The above story first appeared on LatestLY on May 17, 2022 11:46 AM IST. For more news and updates on politics, world, sports, entertainment and lifestyle, log on to our website latestly.com).