In the build-up to the match between Delhi Capitals and Punjab Kings, the main question was -- which side will be the one to stitch back-to-back wins for the first time in IPL 2022. 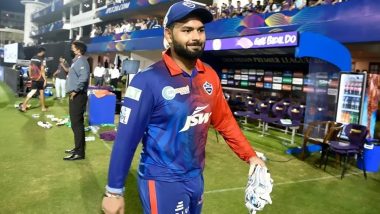 Navi Mumbai, May 17 : In the build-up to the match between Delhi Capitals and Punjab Kings, the main question was -- which side will be the one to stitch back-to-back wins for the first time in IPL 2022. By the time Monday's match ended at the D.Y Patil Stadium, Delhi won by 17 runs, thanks to a 49-ball 63 from Mitchell Marsh and with Shardul Thakur, Axar Patel, and Kuldeep Yadav dismantling Punjab's batting order to displace Royal Challengers Bangalore from fourth place in the points table. Stitching back-to-back wins was something that pleased Delhi skipper Rishabh Pant. PBKS vs DC, IPL 2022: Shardul Thakur, Axar Patel and Kuldeep Yadav Help Delhi Defeat Punjab by 17 Runs; Enter Top Four.

"Playing throughout the tournament we have been losing one game and winning one game. That's something we wanted to change as a team and we got it. The change of pace from Livingstone was good, so it's part and parcel of the game," said Pant after the match. With Livingstone getting some turn to run his way to 3/27, Axar and Kuldeep too found turn for getting their scalps and leaving Punjab in disarray. "Can't be too hard on Warney (Warner) because he has been playing fantastic throughout the tournament. The only thought process was to take it deep. We saw the spinners bowling well on the wicket. The wicket was slow," observed Pant.

With Kuldeep's googlies getting him good purchase, one was curious about him not completing his quota of overs. "We saved him for the back half and then the dew seeps in. So we didn't want to give a massive over. It was 50/50," stated Pant. Delhi's last match in the league stage will be against an out of contention Mumbai Indians on Saturday. Though Sarfaraz did well in his makeshift opening role with a cameo of 36, the suspense on Prithvi Shaw's availability still remains. "Mostly it's going to be the same but we have to assess the wicket. We don't know how it will play in Wankhede. I think he's 50/50. We'll know in a few days." Punjab Kings vs Delhi Capitals IPL 2022: 3 Reasons Why PBKS Lost.

In cricket, one team's happiness is another team's dejection, especially when the question is about reaching the IPL 2022 playoffs. For Punjab captain Mayank Agarwal, it was a day to rue their batting failures as six batters fell even before the chase had reached the halfway mark. "We didn't bat well. Between overs 5 and 10, we lost too many wickets and that's where we lost the game. I thought it was definitely chaseable for the batting we have and the wicket wasn't as bad as it seemed. We just lost too many wickets between the 5th and 10th over and lost the game there," was Agarwal's assessment.

With Punjab still stuck at 12 points, they need a win in their final league match against Sunrisers Hyderabad on Sunday and hope for other results going their way to enter the knockouts. "It's still a match to be played and a match to be won. Two points are crucial for us. We want to go out there and play the best cricket. I think we haven't yet played our best cricket and we look forward to doing that in the last game. We need to speak about the way we went about things with the bat, but that's about it. It's a game to forget," concluded Agarwal.

(The above story first appeared on LatestLY on May 17, 2022 10:57 AM IST. For more news and updates on politics, world, sports, entertainment and lifestyle, log on to our website latestly.com).