Recently, England wicket-keeper batsman Jos Buttler, who plays for Rajasthan Royals, also heaped praises on IPL and called it the best cricket tournament in the world after the World Cups. The veteran cricketer even went on to say that IPL has played a crucial role in the revolution of England’s limited-overs side. 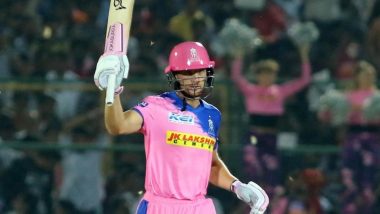 The Indian Premier League (IPL) is one of the most prominent cricket tournaments around the world and many players also dream to feature in the T20 extravaganza. The marquee tournament doesn’t just benefit the players financially but also gives them exposure to play against and with the best cricketers going around. Recently, England wicket-keeper batsman Jos Buttler, who plays for Rajasthan Royals, also heaped praises on IPL and called it the best cricket tournament in the world after the World Cups. The veteran cricketer even went on to say that IPL has played a crucial role in the revolution of England’s limited-overs side. Confident BCCI Will Make IPL 2020 Happen; Preparing for September-November Window, Says Rajasthan Royals COO Jake Lush McCrum.

Following England’s miserable campaign in the 2015 World Cup, the Andrew Strauss-led England Cricket Board (ECB) eased their norms for player’s participation in the IPL. Since then, many England stars like Jos Buttler, Ben Stokes, Jonny Bairstow participated in the T20 tournament and polished their skills. In fact, all these players also played a vital role in guiding England to their maiden 50-over World Cup title in 2019.

“There’s no doubt that it (IPL) has helped English cricket grow and the numbers of players who were involved in the last few years,” said Jos Buttler during a BBC Podcast ‘The Doosra.’ The dasher even went on to claim that he was ‘desperate’ to feature in IPL as it is the best cricket tournament in the World Cups excluding World Cups. “It was something I was desperate to play. For me it’s the best tournament in the world, taking out the World Cups,” he added.

Buttler further said that the tournament excites one and all as it shows some of the best players playing against each other. “Some of the matchups you get to see in the IPL are great. Bangalore has been amongst the top three teams with (Virat)) Kohli, AB (de Villiers) and (Chris) Gayle coming up and then to see them up against a (Jasprit) Bumrah or a Dale Steyn or (Lasith) Malinga.”

The wicket-keeper batsman even went on to advocate former England batsman Kevin Pietersen for demanding ECB to make a way for the participation of England players in IPL. “English cricket has got quite an interesting history with the IPL. The documentary about Kevin Pietersen and how he wanted to get involved and the roadblocks he faced,” he said.

“He really paved the way for a lot of us to go and now play in the IPL with more blessing from English cricket. He is a pioneer in building the steps in place to realise just how important the IPL is for developing cricketers,” added Buttler.

In normal circumstances, the 2020 edition of IPL would have been approaching the knock-out stage. However, just like many other cricket tournaments, the 13th season of the T20 extravaganza has also been called off owing to the coronavirus scare.

(The above story first appeared on LatestLY on May 23, 2020 04:32 PM IST. For more news and updates on politics, world, sports, entertainment and lifestyle, log on to our website latestly.com).