Apart from 2014, KKR also lifted the title in 2012 under the leadership of Gautam Gambhir. In 2018, Dinesh Karthik took over the reins of the side and guided Knight Riders to the playoffs in his maiden stint with the franchise while they finished at the fifth position last year. 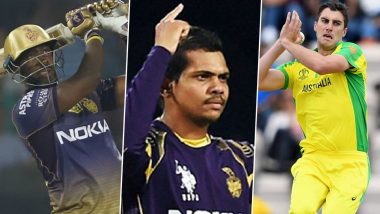 Kolkata Knight Riders (KKR) had lukewarm campaigns in the last few seasons of the Indian Premier League (IPL) as they have put decent performances but weren’t able to get close to the title. However, the two-time champions will have to put up a better show to clinch the IPL 2020 title. With Sunil Narine, Andre Russell, Shubman Gill and Kuldeep Yadav in the ranks, KKR have the right blend of youth and experience. These players, however, need to come together as a unit to make a mark in UAE. Notably, 2014 was the only previous year when some IPL matches took place in UAE and KKR lifted the title. Hence, the fact must boost up their morale. KKR Team Profile for IPL 2020: Kolkata Knight Riders Squad in UAE, Stats & Records and Full List of Players.

Apart from 2014, KKR also lifted the title in 2012 under the leadership of Gautam Gambhir. In 2018, Dinesh Karthik took over the reins of the side and guided Knight Riders to the playoffs in his maiden stint with the franchise while they finished at the fifth position last year. However, they need to identify their best playing XI to get off to a good start in IPL 2019. Only four overseas players can be chosen in a line-up as per the IPL rules. As KKR gear up for the gala tournament, let’s look at four foreign players who can feature in the line-up throughout IPL 2020. Kolkata Knight Riders Likely Playing XI vs Mumbai Indians.

The West Indies star has been a cornerstone of Kolkata Knight Riders ever since he joined the franchise in 2012. Till 2016, he was leading the side’s bowling line-up. However, former skipper Gautam Gambhir asked him to open innings in 2017, and his significance went even higher. Needless to say, Narine will be critical to KKR’s chances in IPL 2020.

The England captain will come back to KKR after seven years and is likely to play all the matches for the franchise. Morgan can take every type of the bowlers to the cleaners along with being able to stabilise the innings after a top-order collapse. Also, his captaincy experience can be used in building the team strategies.

Another Caribbean all-rounder who has been a vital part of KKR is Andre Russell. The dasher is a nightmare for the bowlers in the end overs, and he has proved it on numerous occasions. Also, Russell can give you good four overs which allows to the team management to explore combinations.

Expectations from the Australian pacer are sky high as the franchise bought him for a whopping 15.5 crore in this year’s auction, making him the second-most expensive player in IPL history. Cummins can set the speed gun on fire, and his raw pace makes him even more lethal. The Aussie vice-captain is also able to play some big shots in the end overs.

Dinesh Karthik and Co will start their IPL 2020 campaign against defending champions Mumbai Indians on September 23 at the Sheikh Zayed Stadium in Abu Dhabi. All the foreign players will be available by that match. Hence, KKR will be determined to make a winning start.

(The above story first appeared on LatestLY on Sep 18, 2020 12:29 PM IST. For more news and updates on politics, world, sports, entertainment and lifestyle, log on to our website latestly.com).