IPL 2020 is even more important for MS Dhoni fans as the Chennai Super Kings (CSK) captain will take the field for the first time since India’s heart-breaking exit from 2019 World Cup. The CSK skipper is arguably the greatest captain, a fantastic wicket-keeper and a dashing batsman. Despite coming lower down the order, Dhoni has played several sensational knocks. 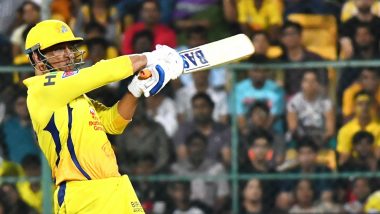 Defending champions Mumbai Indians will take on Chennai Super Kings in the much-awaited IPL 2020 season opener at the Sheikh Zayed Stadium in Abu Dhabi. With Indian cricketers coming back after a long halt, Indian Premier League 2020 holds great significance. However, the gala tournament is even more important for MS Dhoni fans as the Chennai Super Kings (CSK) captain will take the field for the first time since India’s heart-breaking exit from 2019 World Cup. ‘Thala’ fans have their eyes on the clock, and social media is filled with good luck wishes for the talismanic wicket-keeper batsman. CSK Team Profile for IPL 2020: Chennai Super Kings Squad in UAE, Stats & Records and Full List of Players.

CSK are the only team to have reached the playoffs in all the seasons they have participated, and MS Dhoni must be credited for the side’s amazing consistency. The former Indian captain is arguably the greatest captain, a fantastic wicket-keeper and a dashing batsman. Despite coming lower down the order, Dhoni has played several sensational knocks which have taken the opposition by storm. Speaking of his records, the 38-year-old has scored 4432 in 190 matches with an astonishing average of 42.21. On the eve on Dhoni's return, let’s revisit his four knocks which fans cherish till date. MI vs CSK Dream11 Team Prediction IPL 2020: Tips to Pick Best Fantasy Playing XI for Mumbai Indians vs Chennai Super Kings.

To reach the semi-finals of IPL 2010, CSK needed to defeat KXIP in their last group-stage game in Dharamsala. However, the then Kumar Sangakkara-led side posted 192 while batting first. Chasing a mammoth total, many Chennai batsmen got starts, but the required run-rate kept climbing up. However, Dhoni came out to bat at number five and started pulling things back. He took Piyush Chawla and others to cleaners, but the equation came down to the Men in Yellow requiring 16 runs off the last over. However, the cucumber-cool MS Dhoni smashed Irfan Pathan for two giant sixes and helped his side crossed the line with two balls to spare.

Chennai Super Kings got off to the worst-possible start in the eliminator of IPL 2012 with Murali Vijay, and Suresh Raina dismissed inside two overs. Michael Hussey and S Badrinath tried to pull things back, but the scoring rate was always on the lower side. However, Dhoni arrived at the creased and tables were turned upside down. He attacked the bowlers from the outset and scored 51 runs off mere 20 deliveries. Riding on his efforts, CSK advanced to 187/5 and eventually won the game by 38 runs.

70 vs Royal Challengers Bengaluru in 2018

Chasing 206 at the Chinnaswamy Stadium in Bengaluru, CSK kept losing wickets at regular intervals as RCB looked all set to cross the line. However, MS Dhoni had other plans as he put up a batting exhibition. He took the RCB bowlers and scored 70 runs off mere 34 balls. Dhoni smashed seven giant sixes in his innings as CSK registered a five-wicket triumph in the last-over thriller.

84 vs Royal Challengers Bengaluru in 2019

Same opposition, same venue, same situation and another MS Dhoni special. Chasing 162, CSK were reduced to 28/4, and the skipper arrived, looking determined to replicate his previous year heroics against RCB. He started off steadily as wickets were regularly falling at the other end. However, he shifted gears in the death overs and smashed the opposition bowlers for fun. Nevertheless, Virat Kohli still were the favourites till the last over with CSK need 24 runs off the final six balls. Dhoni, however, wasn’t ready to put his guards down as he smashed Umesh Yadav for three sixes and a boundary. However, he couldn't score two runs off the final ball as Chennai lost the game by one run.

Well, the 39-year-old will be determined to replicate his heroics again in IPL 2020. However, the turning tracks in UAE will possess a different challenge. Also, maintaining fitness throughout the 53-day tournament will take some beating. Nevertheless, Dhoni has a knack of defying the odds.

(The above story first appeared on LatestLY on Sep 18, 2020 03:21 PM IST. For more news and updates on politics, world, sports, entertainment and lifestyle, log on to our website latestly.com).