He has taken only nine wickets, which is the lowest among Australia’s three pacers, so far in the series at an average of 31.67. Of those nine, four came in the first innings of the Adelaide Test. Starc went wicket-less in the second innings of the first two Tests. Starc’s discomfort will be a huge concern for the Australia team management. 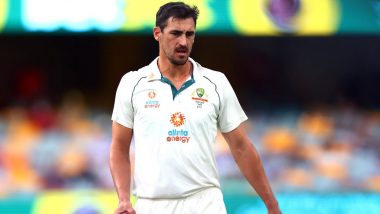 Mitchell Starc gave Australia an injury scare in the final moments of day 4 at The Gabba after clutching his hamstring during the only over he bowled in India’s second innings before rain forced early stumps on the penultimate day of the Border-Gavaskar series. Starc feeling discomfort and grabbing his hamstring will be a huge concern heading into the final day of the fourth Test, which they must win to secure the series and also keep alive their ambitions of reaching the World Test Championship final. Starc has struggled to find his best in the series after starting superbly in Adelaide with wickets in the first over in the opening Test. Who Will Get the Border Gavaskar Trophy if Brisbane Test and Series Ends in a Draw?

He has taken only nine wickets, which is the lowest among Australia’s three pacers, so far in the series at an average of 31.67. Of those nine, four came in the first innings of the Adelaide Test. He went wicket-less in the second innings in the first two Tests. Starc’s discomfort will, however, be a huge concern for the Australia team management as they chase a series win and need to pick all 10 Indian wickets on the final day of the series. Mohammed Siraj Picks Maiden Five-Wicket Haul in Test Cricket, Says ‘Phone Call With Mom Inspired To Fulfill Dad’s Wish’.

"I saw the same thing walking back - he was grabbing at his right hamstring I think it was, so I'm sure he'll get assessed by the medical staff," Steven Smith was quoted as saying by ESPNcricinfo when talking of Starc’s condition. "One thing I know about Mitchell is he's tough and he's played through some injuries before and got the job done, so he'll be hopefully good to go tomorrow.”

Starc dismissed Ajinkya Rahane and Washington Sundar in the first innings of the fourth Test and also bowled the first over in the second innings. But was visibly feeling the discomfort on his right hamstring and was often seen grabbing it. While injury to Starc could leave Australia a bowler short on the final day, they will also pray for rain to stay away from the Gabba as they chase a series win.

Smith was also asked rain intervening Australia’s attempt of winning the Test match and how many overs could actually be bowled on the final day.

"It's hard to know. Obviously with the rain coming, we're certainly not weathermen and don't know it's coming, so you have to play the game as you see it as well," Smith said. "I think the game's in a nice place for us. The wicket's started to play a few tricks today, a couple of balls shot up. So tomorrow I think it's just going to be about bowling good areas and letting the natural variation of the day five wicket do its work and hopefully we can hold on to all the chances.

He also credited the Indian batsmen for their performances and never giving up despite the injury concerns and other adversaries they have been forced to encounter.

"The Indian players have batted well. In Sydney we bowled 130 overs - obviously a different wicket to that [Brisbane] - but for us, it is just about being patient, not searching too much, bowling good areas and just letting it happen. I think the more you go searching for it on these kinds of tracks, then you probably don't get the rewards. So it's about hitting good areas consistently and letting the natural variation of the wicket take its course."

(The above story first appeared on LatestLY on Jan 18, 2021 08:02 PM IST. For more news and updates on politics, world, sports, entertainment and lifestyle, log on to our website latestly.com).