The selection fiasco in the Women's World T20 World Cup semi-final against England refuses to die down with the centre of the storm. 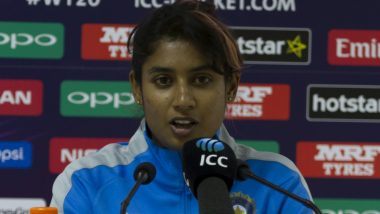 New Delhi, Nov 27 (IANS) The selection fiasco in the Women's World T20 World Cup semi-final against England refuses to die down with the centre of the storm, former India skipper Mithali Raj on Tuesday launching a scathing attack on head coach Ramesh Powar and Committee of Administrators (CoA) member Diana Edulji for supporting the idea of benching her for the crucial tie that the team lost to bow out of the showpiece event in the Caribbean.

Mithali, the highest run-getter for India in the shortest format across men and women, wrote an emotional letter to BCCI CEO Rahul Johri and Cricket Operations GM Saba Karim, where she slammed coach Powar's behaviour towards her as "unfair and discriminatory" while hitting out at Diana for "supporting" her axing.

"For the first time in a 20-year long career I felt deflated, depressed and let down. I am forced to think if my services to my country are of any value to a few people in power who are out to destroy me and break my confidence," Mithali wrote. "To put things in perspective, I have always reposed faith in Diana Edulji and have always respected her and her position as a member of the COA. Never did I think she will use her position against me, more after hearing what all I had to go through in the Caribbean as I had spoken to her about it."

"May I say that I am aware that by writing this e-mail I am making myself even more vulnerable. she is a COA member while I am just a player. For the record, I scored back to back fifties in the games before the semi-final, was adjudged player of the match on both occasions, to leave me out in the semi-final and go with only three performing batters was a decision that left me baffled as much as it left the whole world," she further wrote.

"But the brazen support of a COA member is a clear sign of bias and also that a stance has already been taken against me. By saying 'I don't support someone' and then going all out to support my benching in the press is prejudice of the clearest sort," she added. Jhulan Goswami Speaks on Mithali Raj's Exclusion, Says She Felt Bad for the Senior Cricketer.

Mithali, however, clarified that she had no grudges against skipper Harmanpreet Kaur but clearly mentioned that her issue is with the coach.

"At this juncture I would also like to point out that I have nothing against the T/20 captain Harmanpreet Kaur except for the fact that her call to support the decision of the coach to leave me out of the eleven was baffling and hurtful. Having said that, my issue is deeper. My issue is with the coach Ramesh Powar and in all stories circulating in the press, I find that issue getting diluted," she wrote.

On Powar, she narrated a series of instances where she said: "It was worrying and insulting because the coach was out to destroy and humiliate me."

"For instance, walking off if I am sitting anywhere around, watching in the nets when others bat but choosing to walk away when I am batting in nets, if I try to go up to him to talk to start looking into his phone and keep walking. It was embarrassing and very evident to everyone that I was being humiliated."

Mithali further accused Powar of putting her under virtual "house arrest" and did not allow her to step out of the dressing room during the game against Australia, when she was suffering from fever.Sourav Ganguly Reacts To Mithali Raj's Exclusion, Says 'Welcome to the Group'.

Mithali recovered in time for the semi-final, but surprisingly the coach had other ideas which was evident at the toss when Harmanpreet said the team management did not want to tweak with the winning combination.

"Coming to the semi-finals, usually Ramesh (Powar) announces the team a day before or on the day of the game before we enter the ground but it was unusual that on the day of the semis, he did not announce the team. It is when Harman walked to toss, he came running to me and said that they were going with the same team," she wrote.

"It meant the whole team knew who were playing and it was just me who was not aware. Also, when the team was getting ready to field in the second innings, it is customary that even those who aren't playing should join the team huddle as it has always been the norm in our team."

"But to insult me that day, he sent a word through the manager to tell that it was only the playing eleven that can join in the huddle and the rest can go back to dugout making us feel as outcasts. It was worrying and insulting because the coach was out to destroy and humiliate me," she added.

(The above story first appeared on LatestLY on Nov 27, 2018 11:46 PM IST. For more news and updates on politics, world, sports, entertainment and lifestyle, log on to our website latestly.com).