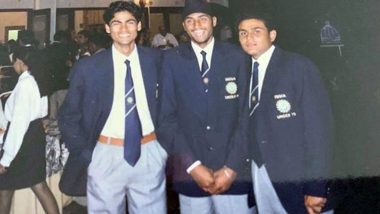 Social media is filled with throwback pictures in recent times as many activities all around the world came to a halt owing to the COVID-19 crisis. Many members of the cricket fraternity also became more active on micro-blogging websites and have been sharing their fun moments with fans. Recently, former India batsman Mohammad Kaif also went down memory lane and shared a throwback picture with Harbhajan Singh and Virender Sehwag. Although, Kaif hasn’t clearly mentioned the exact date of the pic. However, going by look, it is sure that the picture was clicked during the initial days of the three cricket stars. Yuvraj Singh Pokes Fun at Harbhajan Singh As CSK Spinner Poses With Skateboard.

“Purane zamane ke bhole bhale teenagers ‪#Throwback,” wrote the 39-year-old while sharing the old picture on Instagram. In the snap, the three cricketers can be seen posing in official attire. Fans went in nostalgia when they came across the post as the comment section was filled in a jiffy with praises. In fact, Harbhajan himself was quite amused by seeing the pic as he commented: “Lambe coat wala.” Meanwhile, let’s have a look at the picture.

Kaif, Harbhajan and Sehwag have played a lot of cricket together and seem to share a great bond too. In fact, the three were a vital cog in the Sourav Ganguly-led Indian side which famously won the Natwest Trophy in 2002. In fact, after the cricket field, fans have witnessed the three stars joining forces in the commentary box. Meanwhile, Sehwag and Kaif have announced retirement from all forms of cricket while Harbhajan is still determined to play T20 cricket for India.

(The above story first appeared on LatestLY on Jun 29, 2020 06:15 PM IST. For more news and updates on politics, world, sports, entertainment and lifestyle, log on to our website latestly.com).