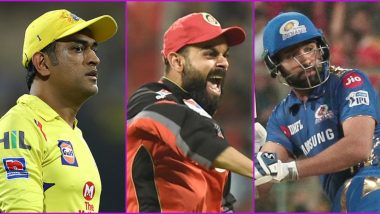 Captains in T20 cricket have to proactive if they are to succeed with the pressures of the fast paced cricket often proving to be daunting. IPL is no different with skipper having to play a crucial role in team integration. Every year there are new faces in the squad and it is imperative for the captains to make them feel part of the squad. Since, the interval between team camp and inception of the tournament is not much, it is a tough task. On the ground too there is so much going inside the heads of skippers and success comes only to those who keep a cool head in such situations. IPL 2020 Captains List: From MS Dhoni to Virat Kohli, Check Out Skippers of All 8 Teams in Indian Premier League 13.

The IPL began in 2008 and we have seen some great cricketers lead their franchisees. Here we take a look at the top 5 most successful captains the league has seen.

Rohit Sharma: The name synonymous with Mumbai Indians’ multiple title wins in the Indian Premier League, Rohit Sharma boats of a win percentage of 60.19 % in his IPL career. He has captained 103 games during his time at Deccan Chargers and Mumbai Indians, winning 62 and losing 41 times. He has lifted the trophy a record 4 times making him the numero uno captain in the league. IPL 2020 Schedule Time Table for PDF Download Online: Full Match Fixtures With Date, Timings in IST and Venue Details of Indian Premier League 13 in UAE.

MS Dhoni: The legendary Indian captain is second only to Rohit Sharma in terms of lifting the IPL trophy with 3 championship wins. He has lead the Chennai Super Kings and Rising Pune Supergiant a staggering 174 times ( an IPL record) winning 104 games, losing 69 times and 1 game ending in no result.

Gautam Gambhir: The former Indian opener made Kolkata Knight Riders from a decent cricketing team to tournament winning squad. He won two titles during his time in Kolkata, boasting a decent winning percentage of 54.69 %. In all he captained 128 times in the league winning 70, losing 57 and 1 game resulting in no result.

Virat Kohli: Despite never winning a title, Virat Kohli’s record means he has made it to the list of most successful  captains with a win percentage of 45.45 %. The Indian skipper has led the RCB in 110 games, winning 50, losing 56 and 4 games did not yield any result.IPL 2020: Imran Tahir, MS Dhoni and Other Oldest Cricketers Set to Take Part in Indian Premier League Season 13.

Adam Gilchrist: Australia’s talismanic cricketer Adam Gilchrist won the 2009 IPL as the skipper of the now disbanded Deccan Chargers. He then moved to leading Kings XI Punjab where he could not emulate the success. In total, he led in 74 games and won 35 games with a win percentage of 47.30 %.

As the 2020 IPL gets closer to its inception, the skippers of the eight franchisees must be having multiple brainstorming sessions with the coaching staff to put the final details in place. The conditions in UAE and with the flat tracks that will likely be prepared, the pressure on the skippers is certain to be high.

(The above story first appeared on LatestLY on Sep 11, 2020 08:00 AM IST. For more news and updates on politics, world, sports, entertainment and lifestyle, log on to our website latestly.com).