Jadeja was the more aggressive of the two and looked more comfortable in playing the big shots but was dismissed when trying to clear the boundary in the 18th over. It was then left to Dhoni to finish the game but the 39-year-old struggled both with the bat and with his health. Dhoni had to call on the physio and take several water-breaks. 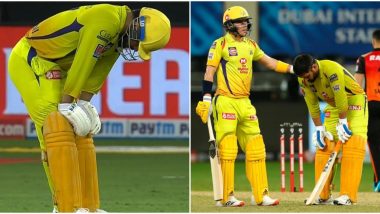 MS Dhoni fans were left upset and a bit disappointed after Chennai Super Kings went down to a third consecutive defeat in Indian Premier League 2020. Asked to chase 166 by the Sunrisers Hyderabad, CSK fell seven runs short to face their third loss in four IPL 2020 matches. But what left fans sadder was seeing MS Dhoni struggled with the bat and in the field during the chase. Dhoni, who of late has come under some criticism for his batting, remained not out on 47 runs from 36 deliveries but failed to find regular boundaries during his knock. MS Dhoni Becomes Most Capped Player in IPL History, Suresh Raina Congratulates CSK Captain.

Dhoni, who came to bat in the seventh over with CSK struggling at 36/3, hit four boundaries and a maximum and played at a strike rate of 130 despite the team needing a big innings from the skipper. Chennai Super Kings were reeling at 42/4 at one stage in their chase of 166 and the onus was left on Dhoni and Ravindra Jadeja to steer the team home from a precarious situation. The pair stitched a 72-run partnership 9 overs with Jadeja smashing 50 off 35 deliveries with two maximums and five boundaries. Netizens Slam MS Dhoni With Funny Memes as CSK Loses Third Game in IPL 2020, Sunrisers Hyderabad Defeats Yellow Army by 7 Runs.

Jadeja was the more aggressive of the two and looked more comfortable in playing the big shots but was dismissed by T Natarajan when trying to clear the boundary in the 18th over. It was then left to Dhoni to finish the game but the 39-year-old struggled both with the bat and with his health. Dhoni had to call on the physio and take several water-breaks during his innings and he later admitted that the conditions were tough.

It was tough to watch MS Dhoni feel the tiredness in the field - this has been one of the toughest faces Dhoni has faced. Come back stronger, @msdhoni. pic.twitter.com/0oStX04UOS

It feels sad to see him like this 😭 Mahendra Bahubali forever 🥰🥰#CSk #Dhoni pic.twitter.com/jFtAPffew7

This Situation is Heartbreaking

This situation🥺but #Dhoni is such a great player ♥️ pic.twitter.com/HKs4nep8Ks

Legend Never Give Up Well Played

We can't except always and everything from a man who has given much to cricket and this country. I was his his fan , I am his fan , I will be Forever. 💛😊#msdianforever #Mahi#Dhoni pic.twitter.com/Vc4zPLr0xk

“I tried to get as much as time as possible. It is quite dry out here. So, the throat gets dry and you start to cough. When you have legal signs, you can take some time off,” said the CSK skipper who was also critical of his side after another close defeat. “Long time back once we lost three in a row. We need to get a lot of things right. It is the professionalism. We need to take our catches not bowl no-balls. Those are controllable and maybe we are getting too relaxed,” he said.

(The above story first appeared on LatestLY on Oct 03, 2020 09:30 AM IST. For more news and updates on politics, world, sports, entertainment and lifestyle, log on to our website latestly.com).