Navdeep Saini has so far played five ODIs and 10 T20I matches since making his debut for the India national team in 2019. He also represented RCB in two seasons of the IPL and has taken 17 wickets in 26 matches. He was instrumental in RCB reaching the IPL playoffs for the first time in four seasons this year. 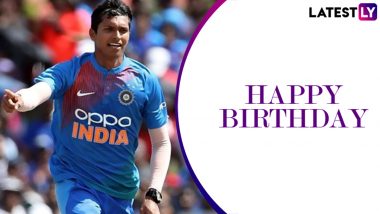 Talented India and Royal Challengers Bangalore (RCB) pacer Navdeep Saini celebrates his 28th birthday on November 23. He has played only a handful of games for the national team but is already an established name in limited formats for India and also for his IPL franchise RCB. Saini burst into the limelight with his performances for Delhi in domestic cricket before lighting the IPL for RCB in 2019. He made his India debut against the West Indies in T20Is last year in August and made his ODI debut four months later. As he celebrates his 28th birthday, take a look at some of his best performances. Mohammed Siraj Vows To Fulfil His Late Father’s Last Wish of Making India Proud, Says ‘I Lost the Biggest Support of My Life’.

Saini has so far played five ODIs and 10 T20I matches since making his debut for the India national team in 2019. He also represented RCB in two seasons of the IPL and has taken 17 wickets in 26 matches. He was instrumental in RCB reaching the IPL playoffs for the first time in four seasons. Saini took six wickets in IPL 2020 and had best figures of 2/25. Take a look at some of his best performances. Here's What 'Secret Message' on RCB Bowler Navdeep Saini's Shoes Reads!

Saini showed in his debut match why he was so highly rated with a breathtaking performance against West Indies. India were playing first match post the ICC Cricket World Cup heartbreak and Saini broke the Windies middle-order with wickets in successive deliveries. Washington Sundar and Bhuvneshwar Kumar had already removed the West Indies openers and Saini struck in his first over.

He dismissed Nicholas Pooran and Shimron Hetmyer off consecutive deliveries and followed it with a one-run over. Saini then bowled a maiden in the final over of the innings and also removed Kieron Pollard to help India restrict West Indies to 95/9. India chased down the score 16 deliveries and four wickets to spare.

Saini continued his rise and took another three-wicket spell when Sri Lanka came visiting earlier this January. Asked to chase 202, Sri Lanka were reeling at 3/15 within four overs and Saini further added to their misery by yorking the dangerous Kusal Perera. He also removed the in-form Dhananjaya de Silva and Lasith Malinga to fold Lanka’s chase and help India win the match by 78 runs.

Saini once again played a crucial role as India beat Sri Lanka by seven wickets. Saini took two important wickets and controlled the run flow conceding only 18 runs to help India restrict Sri Lanka to 142/9. Navdeep first clean-bowled Danushka Gunathilaka with a terrific full-length ball and also got rid of Bhanuka Rajapaksa after beating the batsman with pace. He ended the game with figures of 2/18.

Saini bowled brilliantly as RCB successfully defended 163 against Sunrisers Hyderabad and got off to a winning start in IPL 2020. The game looked completely in SRH’s command but Yuzi Chahal got two important breakthrough wickets before Saini turned the match with two wickets in a single over at the death. He bowled Rashid Khan and Bhuvneshwar Kumar in space of three deliveries to end SRH’s hopes of a win.

Saini put on a brilliant display of fast bowling in the all-important semi-final of 2017-18 Ranji Trophy. Playing for Delhi, Saini delivered not one but two brilliant spells that took Delhi into the final of Ranji Trophy. He got three scalps in the first innings and followed it by a four-for in the last innings of the clash which helped Delhi register a victory by an innings and 26 runs.

(The above story first appeared on LatestLY on Nov 23, 2020 08:00 AM IST. For more news and updates on politics, world, sports, entertainment and lifestyle, log on to our website latestly.com).