On Which Channel India vs Bangladesh 2022 Series Will be Telecast Live? How To Watch IND vs BAN Live Streaming Online? Check Viewing Options of Indian Cricket Team Upcoming Matches

Big names Virat Kohli, Rohit Sharma etc will return as India take on Bangladesh in the three-game ODI series. The two teams will also battle it out in the two Tests. Read on to find out how to watch live telecast and live streaming of these games. 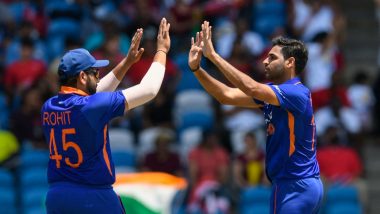 After a year of many highs and lows, team India will finally conclude the 2022 season with a tour to Bangladesh in December. The tour will include three-match ODI and two-match Test series. All three ODIs will be played at Sher-e-Bangla National Cricket Stadium Dhaka, scheduled on December 04, 07 and 10. Subsequently, the first Test will be played at the Zahur Ahmed Chowdhury Stadium Chittagong starting from December 14 and the second Test at Sher-e-Bangla National Cricket Stadium from 22 to 27 December. India vs Bangladesh 2022 Schedule for Free PDF Download Online: Get IND vs BAN ODI and Test Series Fixtures, Time Table With Match Timings in IST and Venue Details.

Team India had a phenomenal season of cricket this year as men in blue travelled almost everywhere. The results might have been varied but what remained constant was the fans of Indian cricket  who literally followed the team like a twelfth man. Regardless of two major disappointments this year in the T20I Asia Cup held in UAE and T20I World Cup Australia, the supporters kept coming to stadiums to root for the team during the New Zealand tour. And the same is expected, when Men in Blue visit Bangladesh later in December. But if you're a fan who is planning to cheer team India from home, guess what you have landed at the right place as we get you covered with all the details related to the broadcasting/media rights of the upcoming series. Virat Kohli Gifts Cricket Bat to Litton Das After India’s Thrilling Five-Run Win Over Bangladesh in T20 World Cup 2022.

How to Watch Live Telecast of India’s Tour of Bangladesh 2022?

Sony Pictures Network (SPN) have acquired the television and digital rights to broadcast India's tour to Bangladesh 2022 in India. The much-anticipated series will be live telecast across Sony Sports channels in English, Hindi, Tamil and Telugu commentary.

How to Watch Live Streaming of India’s Tour of Bangladesh 2022 Online?

With Sony Sports holding the broadcast rights, the live streaming online of three-ODIs and two Tests between India and Bangladesh will be available on SonyLiv application, which is the OTT platform of SPN.

(The above story first appeared on LatestLY on Nov 28, 2022 09:58 AM IST. For more news and updates on politics, world, sports, entertainment and lifestyle, log on to our website latestly.com).