Before the Test series begins, a three-day warm-up/practice match will take place from July 11 onwards. The Test series will be played between July 16 to 28 and is part of the ICC World Test championship 2021-2023. 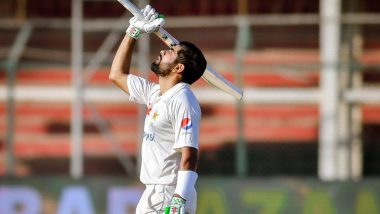 Pakistan (PAK) will tour to Sri Lanka (SL) for a two-match Test series in July 2022. The Test series will be played between July 16 to 28 and is part of the ICC World Test championship 2021-2023. Galle International Stadium in Galle will host the first match, and the second Test will be played at the R. Premadasa International Cricket Stadium in Colombo. Meanwhile, you can download the full schedule of the PAK vs SL Test series in PDF format here, which contains the match timings in IST along with venue details.

Pakistan's last tour to Sri Lanka was in 2015, which consisted of three Tests, five ODIs and two T20I matches. Pakistan had ruled over the hosts by winning in all three formats of the game back then. The Green Shirts will intend to emulate their previous tour, counting the better balance in the team this time around. Before the Test series begins, a three-day warm-up/practice match will take place from July 11 onwards. Shaheen Shah Afridi, Pakistan Bowling Sensation, Named DSP of Khyber Pakhtunkhwa Police.

Pakistan will arrive in Sri Lanka on July 6 after they are done with the seven-day-long preparatory session at Pindi cricket stadium. Yasir Shah, senior spinner of Pakistan, is back in the Test squad who was sidelined last year due to a thumb injury in National T20 Cup. It is noteworthy that the leg spinner was key to success for Pakistan during the 2015 tour to Sri Lanka. He had picked 24 wickets at an average of 19.33. Pakistan is currently on number three of the ICC WTC 2021-23 points table while Sri Lanka have dropped down to number six. The upcoming Test series is crucial for both sides to improve their standings in the World Test Championship 2021-2023, especially for the hosts.

(The above story first appeared on LatestLY on Jul 06, 2022 12:38 PM IST. For more news and updates on politics, world, sports, entertainment and lifestyle, log on to our website latestly.com).