Pravin Tambe, 48, became first Indian to make CPL debut. The veteran leg-spinner has a ton of experience on his back and will aim to make a mark in the on-going tournament too. Tambe’s debut was undoubtedly a much-awaited one netizens congratulated the spinner and backed him to make a mark. 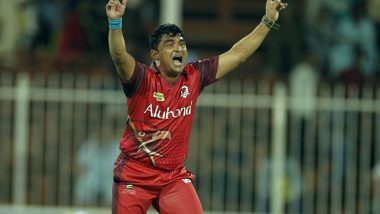 After warming the benches in the first three matches, Pravin Tambe finally made his debut for Trinbago Knight Riders against St Lucia Zouks. With this, the veteran leg-spinner became the first Indian to play a Caribbean Premier League (CPL) match. Tambe, who will turn 49 in October, has a ton of experience on his back and will aim to make a mark in the on-going tournament too. Despite not being a great turner of the ball, the leggie can fox the batsmen with his accurate bowling and bucket of variations. Tambe’s debut was undoubtedly a much-awaited one netizens congratulated the spinner and backed him to make a mark. Pravin Tambe Becomes First Indian to Make Debut in Caribbean Premier League, Achieves Feat in Trinbago Knight Riders vs St Lucia Zouks CPL 2020 Match.

After getting snubbed from IPL 2020, TKR bagged Tambe’s services in the CPL draft. The veteran has showcased his prowess in many T20 competitions including the Indian Premier League. In 33 IPL matches, the leg-spinner scalped 28 wickets at an impressive economy rate of 7.75. He was expected to be a park of TKR’s playing XI from the opening game. However, the presence of Sunil Narine and Fawad Ahmed kept him in the dugout. Nevertheless, Narine sustained an injury ahead of the game, and Tambe received his cap. Meanwhile, let’s look at how netizens reacted to Tambe’s feat. Caribbean Premier League 2020 Schedule, Free PDF Download Online.

I don’t know about Pravin Tambe but I am excited that he’s making his debut for @TKRiders! What an inspiring story!! Hope you watch today at 7:30 PM IST on @StarSportsIndia @legytambe @KKRiders pic.twitter.com/SLpUywzgUV

. @legytambe beginning his stint at the @CPL at the age of 48 is such an inspiring tale. Just shows that it is never too late for new beginnings. Wish you a very good innings Pravin Tambe.#CPL20 #CPL2020 #CricketPlayedLouder

Super excited to see Pravin Tambe playing for TKR, he was bought by KKR in December only to be found out that he can't represent them as he had already played in Dubai T10 League, so another opportunity for him who's gonna be 49 soon. #CPL20 #TKRvGAW pic.twitter.com/CfhasBU9p0

Had predicted that Tambe might get a game, however not at the expense of Narine.

Speaking of the game, Trinbago Knight Riders took the field on the back of three consecutive victories while Darren Sammy’s Zouks, who are sitting second in the team standings, have a chance to go at the pinnacle. Narine’s absence is certainly a significant blow for the Kieron Pollard-led time as the off-spinner has troubled the batsmen throughout the tournament along with playing some impressive knocks.

(The above story first appeared on LatestLY on Aug 26, 2020 08:35 PM IST. For more news and updates on politics, world, sports, entertainment and lifestyle, log on to our website latestly.com).