The seventh edition of the Pakistan Super League is set to begin on January 27. The final would be played exactly a month later, on February 27. Multan Sultans are the defending champions but this time, they have tough contenders to challenge hard for the PSL 2022 title. 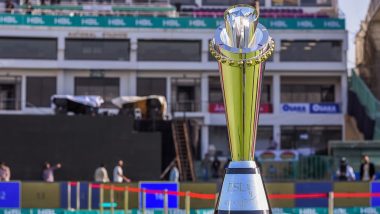 The Pakistan Super League 2022 is set to kick start from January 27 onwards. The tournament, which comprises of six teams--Multan Sultans, Karachi Kings, Peshawar Zalmi, Quetta Gladiators, Islamabad United and Lahore Qalandars would have an array of Pakistan and as well as international stars in action. Multan Sultans, the defending champions, would begin PSL 2022 with a match against Babar Azam's Karachi Kings. The tournament would be played in two phases, the first one being in Karachi and the second in Lahore. The PSL 2022 final would be played on February 27, exactly a month after the competition gets underway. Islamabad United Squad in PSL 2022: Team Profile, Schedule of IU in Pakistan Super League T20 Season 7

Multan Sultans won the title last year after an epic final clash against Peshawar Zalmi. Rilee Rossouw and Sohaib Maqsood were their star performers as the duo scored quickfire runs in order to propel the side to a 200+ run total, something that turned out to be well enough to win the title. This year, however, they would have to begin afresh, albeit as the champions where all the other sides would be engaging in some tough competition to clinch the coveted trophy at the end of it all.

When Is Pakistan Super League 2022? (Know Date, Time and Venue)

The Pakistan Super League 2022 edition will be played from January 27, 2022, to February 27, 2022. The tournament has been divided into two phases based on venues. The first phase (15 matches) would be completed at the National Stadium in  Karachi while Lahore's Gaddafi Stadium would host all matches of the second half (19 games) of the competition. The matches would generally be played at 07:30 pm IST with some days having the games placed at 2:30 pm, 3:30 pm and also 8:30 pm IST. Quetta Gladiators Squad in PSL 2022: Team Profile, Schedule of QG in Pakistan Super League T20 Season 7

Where To Watch Pakistan Super League 2022 Live Telecast On TV?

Sony Sports Network are the broadcasters of PSL 2022 in India according to their official website and will telecast the matches on TV. Fans can tune into the Sony Sports Network channels to watch the Pakistan Super League season 7 on TV. Apart from this, the PSL 2022 would be available for viewing in Australia where fans can watch the tournament on Fox Sports. In some areas, ICC TV would provide live streaming of PSL 2022.

PSL 2022 Live Streaming will be available on the online platform Sony Liv, as the tournament would be broadcasted by the Sony Sports network. Fans can enjoy live streaming of the PSL 2022 matches in India on the Sony Liv app but they would need to pay a nominal fee to watch the content.

(The above story first appeared on LatestLY on Jan 26, 2022 02:44 PM IST. For more news and updates on politics, world, sports, entertainment and lifestyle, log on to our website latestly.com).