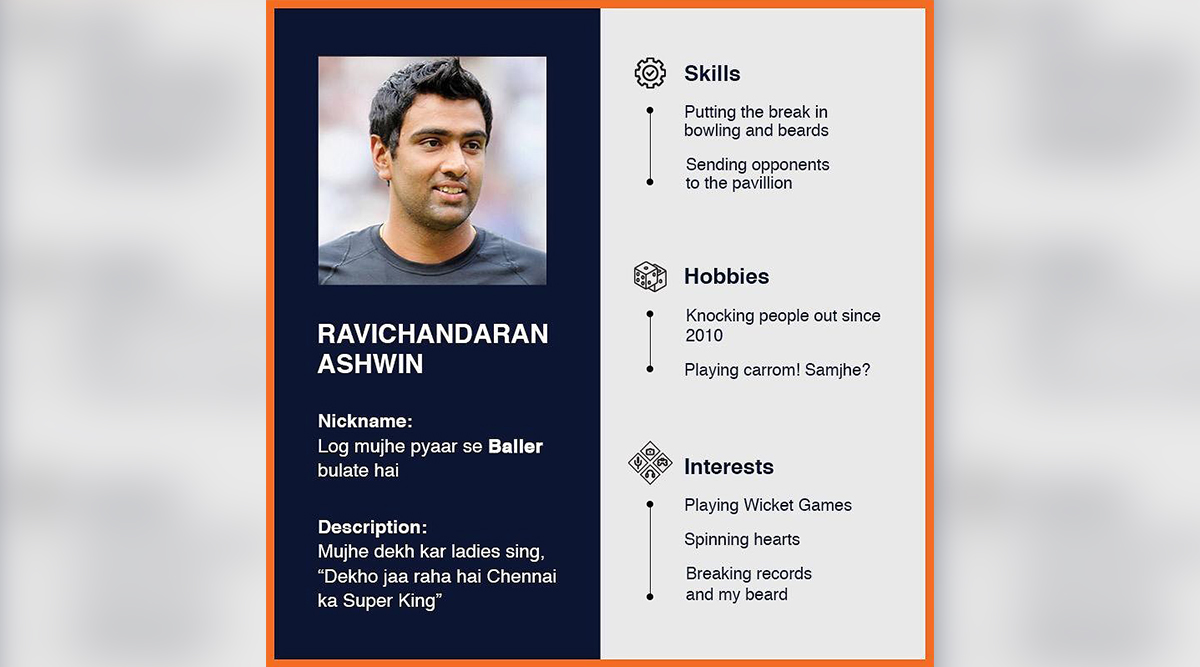 Indian spinner Ravichandran Ashwin is certainly one of the sharpest minds in modern-day cricket and his buckets of variations are proof of his artistry. However, the spinner’s creativity is just not limited to the cricket field and one can see that in his latest Instagram post. Ashwin shared his CV on the picture-sharing website and it’s certainly one of the most impressive resume one will come across. Being a holder of 567 International wickets, Ashwin has a lot of achievements to flaunt. However, none of these records were mention in Ashwin’s bio but it was his witty and creating way of presenting himself which impressed the fans. R Ashwin Was Threatened of 'Getting Fingers Chopped': Indian Spin Wizard Reveals.

In the description section of the resume the talismanic off-spinner wrote: "Mujhe dekh kar ladies sing, 'Dekho jaa raha hai Chennai ka Super King'. While ”Sending opponents to the pavilion," was one of the skills mentioned by Ashwin in his CV. In the hobbies, he wrote: Knocking people out since 2010, referring to the year the bowling all-rounder made his international debut. His interest is something which will not surprise you as he wrote: “Playing wicket games", "spinning hearts.”

Creative with my looks, creative with my CV! What does your CV look like? Follow @break_the_beard, take a screenshot of the template, edit it on your story and share your CV on your profile! #BreakTheBeard #ShareYourCV #StayGroomed #RAshwin #Cricket #CricketNews #India #BleedBlue #MoBro #MoWisdom #FeelFresh #GroomedIsIn #CricketMemes

As of now, Ashwin is in New Zealand with the national side, participating in the two-match Test series. He put up a decent show in the opening game of the series as he scalped three wickets in quite unfavourable conditions. However, India went to lose the match by 10 wickets and are trailing 1-0 in the two-match series. The second match will be a do-or-die game for the Virat Kohli-led side and Ashwin will aim to make a mark again.