Ravindra Jadeja-Like Cricketers and Hardik Pandya Will Not Be in My White-Ball Cricket Team, Says Sanjay Manjrekar

Manjrekar had found himself in hot water when he called Jadeja a ‘bits and pieces’ cricketer after the India vs England match at the ICC 2019 Cricket World Cup last year. He was trolled for his comments but things turned uglier when Jadeja lashed back at him through a tweet and asked him to end his ‘verbal diarrhoea.’ 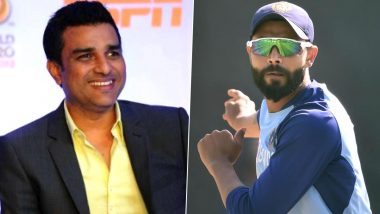 Sanjay Manjrekar is finally back in the commentary box after being reinstated as a part of the BCCI commentary team for cricket matches involving India. He had been left out of the commentary panel for IPL 2020 and was reportedly dropped from BCCI’s list of commentators for his ‘bits and pieces’ comment on Ravindra Jadeja during the 2019 ICC world cup and also the on-air spat with co-commentator Harsha Bhogle. Manjrekar, however, has not hatred for Jadeja. He clarified those comments were made more for his liking for specialists. Sanjay Manjrekar Trolled Mercilessly For Leaving Out Ravindra Jadeja From His Playing XI for India vs Australia 1st ODI 2020.

Manjrekar, 55, had found himself in hot water when he called Jadeja a ‘bits and pieces’ cricketer after the India vs England match at the ICC 2019 Cricket World Cup last year. He was trolled for his comments but things turned uglier when Jadeja lashed back at him through a tweet and asked him to end his ‘verbal diarrhoea.’ Since then both have buried the hatchet but Manjrekar is often trolled for his comments on Jadeja. Sanjay Manjrekar Reveals the First Thing That Comes in His Mind After Hearing Harsha Bhogle.

The cricketer-turned-commentator, however, feels his ‘bits and pieces’ comments were taken out of context due to confusion and also because Jadeja reacted on it. “My remark about Ravindra Jadeja being a ‘bits and pieces player’ was not me being wrong as a commentator, but only because English is not everyone’s second language,” Manjrekar told The Hindu in an interview. “People caught on to that only because Jadeja reacted.”

He also clarified his comments were not made out of hatred for Jadeja but more for his liking towards specialist cricketers. “My selection and thoughts are based on a principle that I have learnt over the years: if you have specialists who can walk in based on one discipline, you fill your team with those players,” said Majrekar adding even Hardik Pandya won’t find a place in his limited-overs India side.

“I do not have a problem with Jadeja; I have a problem with his kind of cricketers in white-ball cricket. Even Hardik Pandya will not be in my team,” he said. “They add illusionary value to the team. Of course, I have always rated Jadeja highly in the Test format.”

Manjrekar is, however, remorseful for the comments his aimed at Bhogle during the India vs Bangladesh pink-ball Test match at Eden Gardens last year. Manjrekar took a sarcastic dig at Bhogle by questing his credentials during an on-air argument over visibility with the pink ball. “The only mistake I will hold myself responsible for, in all my twenty years of commentary, is the Harsha Bhogle incident where I allowed him to get under my skin and said something that was not in good taste,” said Manjrekar.

(The above story first appeared on LatestLY on Nov 29, 2020 09:34 PM IST. For more news and updates on politics, world, sports, entertainment and lifestyle, log on to our website latestly.com).