A win for Royal Challengers Bangalore would ensure their qualification for the playoffs while Punjab Kings need two crucial points from this match to stay alive in the hunt for making it to the top four. With both teams having won their last matches and being led by in-form captains, this clash is going to be a thrilling one. 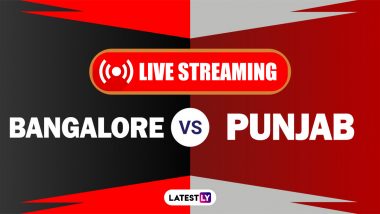 Royal Challengers Bangalore would be keen on ensuring their qualification for the playoffs when they face Punjab Kings on Sunday, October 3. The match would be played at the Sharjah Cricket Stadium in Sharjah and would begin at 3:30 pm IST (Indian Standard Time). After a terrible start to their UAE leg of IPL 2021 where they suffered defeats by former champions Kolkata Knight Riders and Chennai Super Kings, Royal Challengers Bangalore have bounced back in style, winning their next two games against Mumbai Indians and Rajasthan Royals respectively and now, they are on the cusp of qualifying for the playoffs. With 14 points from 11 matches so far, RCB need just one more win under their belt to make sure that they become the third team in IPL 2021 to qualify for the playoffs. And Virat Kohli would aim at doing it through today's match itself and not plan on leaving it late. RCB vs PBKS Preview: Likely Playing XIs, Key Battles, Head to Head and Other Things You Need To Know About VIVO IPL 2021 Match 48

Punjab Kings on the other hand, have discovered renewed vigour and energy after they defeated Kolkata Knight Riders in their last match. Now, they have once again brought themselves back into the mix for playoff qualification and KL Rahul's side now need to win all their matches and depend on other results to make it through to the last four. However, beating Bangalore would not be easy as the RCB middle-order, which looked out of touch, is now in good form with former Punjab player Glenn Maxwell amongst the runs.  Also, PBKS need to be wary about the threat that current purple cap holder Harshal Patel poses.RCB vs PBKS, Sharjah Weather, Rain Forecast and Pitch Report: Here’s How Weather Will Behave for Royal Challengers Bangalore vs Punjab Kings IPL 2021 Clash at Sharjah Cricket Stadium

Those unable to watch the RCB vs PBKS match live on television can follow the game online. Disney+Hotstar will be live streaming the Royal Challengers Bangalore vs Punjab Kings match online for its fans in India. Fans, however, need to subscribe to Hotstar by paying a nominal subscription fee. JIO are also providing Hotstar subscriptions on select plans.

(The above story first appeared on LatestLY on Oct 03, 2021 09:59 AM IST. For more news and updates on politics, world, sports, entertainment and lifestyle, log on to our website latestly.com).