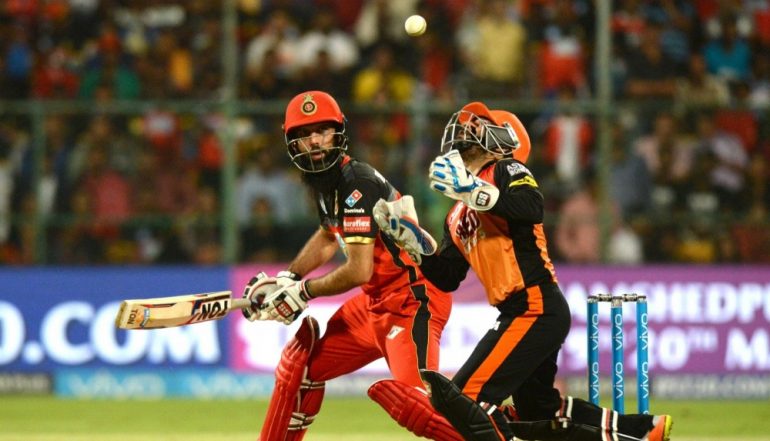 The Royal Challengers Bangalore are out of the running for the playoffs of the 2019 Indian Premier League, but in their final game of the season, they can play the role of spoilsport to perfection. If they beat visitors Sunrisers Hyderabad at home, they will all but end their hopes of making it to the next round. Hyderabad have not been their usual self this season with the team struggling for consistency. But the last year’s finalist will believe they can overcome the challenge thrown by Bangalore who are possible the worst team in the league. In terms of head to head, the two teams have played 14 games with Hyderabad winning 8, Bangalore winning 5 and 1 game producing no result. Let us look at the results of their last five encounters. Royal Challengers Bangalore vs Sunrisers Hyderabad Live Cricket Score 54th T20 Match.

Hyderabad completely dominated Bangalore in this game registering a mammoth 118 runs win in the process. Batting first, hundreds from David Warner and Jonny Bairstow helped Hyderabad reach 231/3 in their quota of twenty overs. The pressure of the run chase got to the visiting side’s batsmen as they folded for 113.

AB De Villiers and Moeen Ali had a great time in the middle ripping apart the opposition attack as Bangalore posted a total of 218/6 batting first. The duo got out after scoring 69 and 65 respectively and they was also a late cameo from Sarfaraz Khan. Hyderabad knew they had a tough game at hand but Kane Williamson showed grit with a fighting 81. Despite his best efforts, SRH lost the game by 14 runs. RCB vs SRH, IPL 2019 Match 54 Preview: Sunrisers Hyderabad Eye Play-Off Berth Against Royal Challengers Bangalore.

Low scoring games are a strong point for Hyderabad as they have done well in defending low scores in the past. After being bundled out for 146 in their innings, Bhuvaneshwar Kumar picked up 4 wickets to put RCB on the mat. Virat Kohli was the only player from Bangalore who looked like setting there with a well taken 39. They eventually lost by 5 runs. Indian Premier League 2019 – Points Table.

A disappointing day for the two sets of fans as the game between RCB and SRH was abandoned due to heavy rainfall.

One of the few innings in the IPL when Yuvraj Singh looked his very best as he smashed 62 runs off 27 balls. He was assisted by Moises Henriques and Shikhar Dhawan in helping Hyderabad reach 207/4. Bangalore kept losing wickets at a regular interval in their chase losing the game by 35 runs.

Bangalore has had a poor season once again which is not new for their fans but they will love to end the campaign on a high which could spell trouble for Hyderabad.