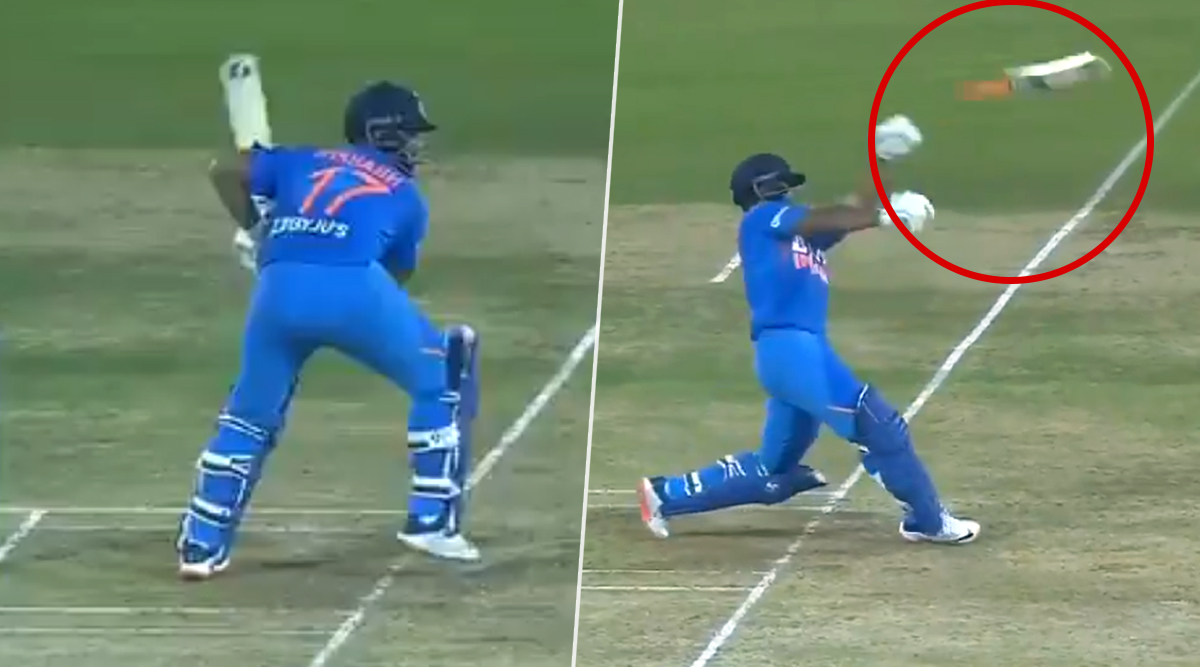 Rishabh Pant played combatively better knock with his 33 runs during India vs West Indies 2nd T20I 2019. However, one moment during his batting attracted the attention of all. Rishabh Pant, while trying to hit a big shot on an off-side delivery, lost grip of his bat. Indian wicket-keeper Pant’s bat flew away towards the leg umpire. The video of the moment became a trending topic on social media platform Twitter.  India Vs West Indies, Live Cricket Score 2nd T20I Match.

The incident occurred on the first ball of the final over of IND vs WI 2nd T20I 2019 game. West Indies bowler Sheldon Cottrell bowled a pace delivery to Pant. He missed the ball and also lost grip of his bat. The bat travelled to the square leg. It became a funny moment during the course of the nail-biting match. Have a look at the video below. Most Runs in T20Is: Virat Kohli Surpasses Rohit Sharma As Leading Run-Scorer in T20 Internationals During India vs West Indies 2nd T20I 2019.

Meanwhile, India put up 170-7 while batting first in the IND vs WI 2nd T20I 2019 match. Shivam Dube, who came to bat at no. 3 instead of Virat Kohli, smashed a quirk-fire of 54 off 30 balls. Left-handed batsman Dube's first T20I half-century witnessed him hitting 4 sixes and 3 fours. His knock helped India for a solid start.

Rishabh Pant, who failed in the first IND vs WI game with just 18 runs, was another great performer in the 2nd T20I. Pant remained not out till the end and also hit 33 runs off 2 balls to take India to a respectable total in the 2nd T20I game in West Indies' tour of India 2019.

Meanwhile, Virat Kohli also became the leading run-scorer in T2OIs during IND vs WI 2nd T20I game. Indian skipper Virat Kohli hit 19 runs, 4 more than Rohit Sharma who was bowled out for 15 runs. Virat needed 4 runs to overhaul Rohit Sharma as leading run-scorer ahead of the match and he was able to do so. Earlier, Kieron Pollard won the toss and elected to bowl first.