Rohit Sharma became the second player after Kieron Pollard, and congratulatory messages are pouring in for the Hitman from all around the world. On the occasion, the talismanic batsman received a special jersey with number 150 inducted on it. 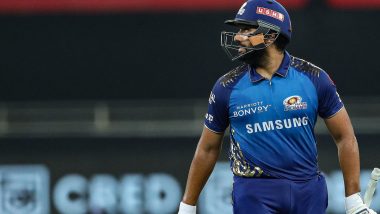 Rohit Sharma added another jewel to his already illustrious crown when he took the field against Delhi Capitals in Dream11 Indian Premier League 2020. The Hitman became the second player after Kieron Pollard, and congratulatory messages are pouring in for the Hitman from all around the world. On the occasion, the talismanic batsman received a special jersey with number 150 inducted on it. Usually, Rohit wears the no. 45 jersey but against Delhi, he’s sporting number 150 at his back. MI mentor Zaheer Khan handed Rohit the jersey and the 33-year-old will like to make the day even more special by putting up a match-winning performance. MI vs DC Score Updates IPL 2020.

Mumbai Indians bagged Rohit Sharma’s services during the 2011 IPL auctions, and the swashbuckler justified his franchise’s decision by piling up a mountain of runs. Till 2012, Mumbai didn’t win a single title. However, their fortunes changed when Rohit took over the reins of the team in 2013. He guided MI to their maiden title, which was just a start. Under the dasher’s leadership, Mumbai also went on to lift titles in 2015, 2017 and 2019- becoming the most successful IPL side. The defending champions have also made an emphatic start to their IPL 2020 campaign and are on the right path to retain the trophy. Kieron Pollard Only Cricketer Who Might Play 200 Games for Mumbai Indians, Says Hardik Pandya.

Meanwhile, Delhi Capitals won the toss in Abu Dhabi and elected to bat first. They didn’t start brilliantly with Prithvi Shaw and Ajinkya Rahane back in the hut inside the powerplay overs. However, Shikhar Dhawan and skipper Shreyas Iyer brought DC innings back on track. Hence, Mumbai Indians batsmen have a job in hand to take their side over the line.

(The above story first appeared on LatestLY on Oct 11, 2020 09:09 PM IST. For more news and updates on politics, world, sports, entertainment and lifestyle, log on to our website latestly.com).