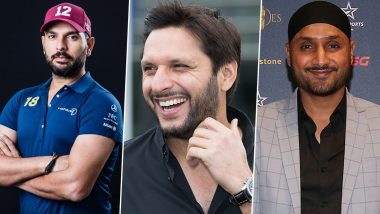 Shahid Afridi has been in the news ever since he had made unacceptable remarks recently about Kashmir and Prime Minister Narendra Modi. Harbhajan Singh and Yuvraj Singh who had made donations to Shahid Afridi Foundation before the statement from the Pakistani cricketer went on to slam him left, right and centre and said that they were quite disappointed with his words. Bhajji and Yuvi even swore to not keep in touch with Afridi. Now, the former Pakistani cricketer has said that the two are compelled to speak against him. Shahid Afridi Thanks Harbhajan Singh After Indian Cricketer Praises Former Pakistan Captain for Providing Relief to Needy People Amid Coronavirus Crisis.

During an interview, Afridi further said that he will remain thankful towards the two cricketers for the donation they had made to his Foundation.  "I'll remain thankful towards Harbhajan and Yuvraj for supporting my foundation. The real problem is that this is their compulsion. They live in that country. Wo majboor hain. They know that people are being oppressed in their country. I won't say anything further," Afridi said on Pakistan channel Hum News.

Harbhajan Singh had said that he donated to Afridi with a good intention but speaking ill about Indian PM is unacceptable. Yuvi said that he will snap all the ties with Afridi. Not very long ago, the Pakistani cricketer was in the news for visiting the crash site of the PIA plane which crashed in Karachi. The Pakistani social media users had slammed the former cricketer for being publicity-hungry . A few netizens even questioned the authorities for allowing Afridi to be on the site.

(The above story first appeared on LatestLY on May 27, 2020 09:06 AM IST. For more news and updates on politics, world, sports, entertainment and lifestyle, log on to our website latestly.com).