Shane Watson Batted With a Bleeding Knee During MI vs CSK IPL 2019 Final, Got Six Stitches After the Match, Reveals Harbhajan Singh 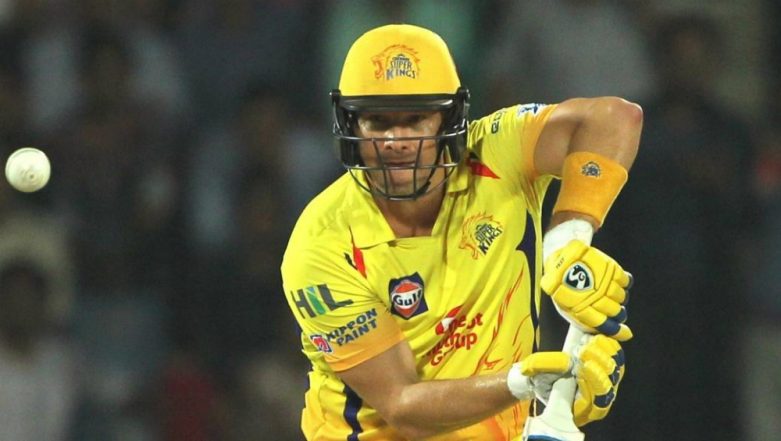 Mumbai Indians after winning the toss elected to bat first and went on to post the total of 149/8 in 20 overs. Kieron Pollard yet again played an important knock of 41 from 25 balls at the right time when his team needed him to deliver. In reply CSK opener Shane Watson batted with his heart out as he almost took his team over the line before getting run out by Krunal Pandya in the last over. He played a fine knock of 80(59). Guests Enjoy Mumbai Indians vs Chennai Super Kings IPL 2019 Final Live Streamed on Giant Screen at a Wedding, Leave Bride And Groom Ignored (Watch Video)

Most importantly, he played like a wounded warrior as Chennai Super Kings official Twitter handle shares a picture of his knee bleeding blood while batting against Mumbai Indians. Harbhajan Singh after MI vs CSK match shared on his Instagram story picture of Watson where he wrote that the former Australian all-rounder got six stitches after the game as he got injured during the match while making a dive to save himself from the run-out. He further added that Watson continued batting inspite of his injury without telling anyone about it. Team Mumbai Indians Greet Fans in an Open Bus After Lifting IPL 2019 Trophy (Watch Videos & Pics)

From Mumbai Indians side Jasprit Bumrah proved to be effective again as he bought his team back into the contest after dismissing Dwayne Bravo in the 19th over. He had figures of 2/14 in 4 overs. Lasith Malinga although gave away 20 runs in the 16th over and bought CSK on the driving seat, however, he pulled things back in the last over where he defended 9 runs.  Malinga bowled the delivery of his life to dismiss CSK player Shardul Thakur by leg before when Chennai needed 2 runs from the last delivery. With this victory, Mumbai Indians won the IPL tournament for the fourth time after winning it in 2013, 2015 and 2017.