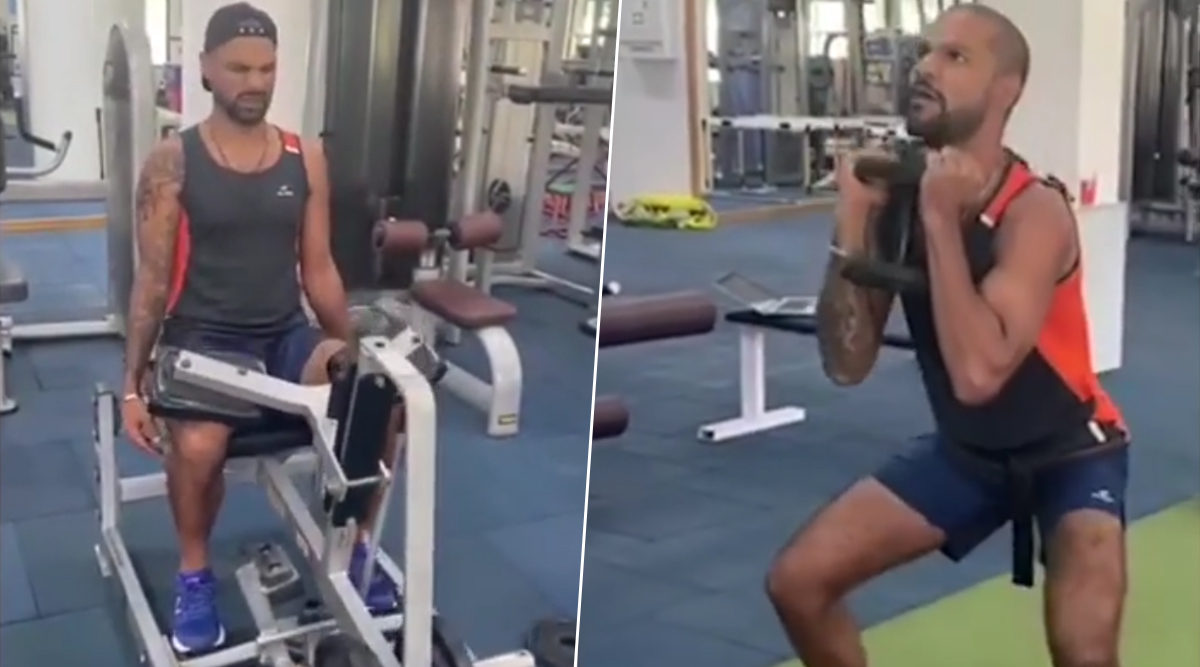 Indian Cricket team left-handed star opening batsmen Shikhar Dhawan posted a video on his Instagram account, in which he can be seen doing different exercises. This is southpaw's first gym session after incurring shoulder injury during the decider match of India vs Australia ODI series which took place in January 2020. Shikhar Dhawan in his workout video looks determinant and positive for a comeback soon. In the below article, let us have a look at the Indian batsman workout video along with a brief description of those exercises. Shikhar Dhawan Shares Picture With Hardik Pandya As They Continue to Recuperate From Injuries, Cricketers Vow to ‘Comeback Stronger’

During India vs Australia, 3rd ODI played at Bengaluru on January 19, 2020, Shikhar Dhawan injured his left shoulder while making a dive at the cover region to save an Aaron Finch shot. The injury was so worst that Dhawan even did not come out to bat during India chase, as KL Rahul and Rohit Sharma opened up the inning. The shoulder injury also forced Shikhar Dhawan to be ruled out of India vs New Zealand T20I and ODI series which concluded recently. His absence, perhaps cost India a series loss in ODIs against Kiwis, considering that Shikhar Dhawan is good in 50 overs game. Shikhar Dhawan’s Latest Prank With Wife Ayesha and Son Zoravar Will Make You Burst Into Laughter (Watch Video)

In the below video, Shikhar Dhawan can be seen doing lower body exercises to maintain his fitness and keep the body fat percentage to a low level. Injuries shouldn't stop your workout, as it will only reduce the endurance and V02 max level, which is the worst case for any sportsman. The Indian Cricket team left-handed batsman can be seen doing goblet squat, goblet walking lunges and calf raises. These exercises majorly work on quadriceps muscles and calf muscles of the lower body. Glute muscles also get engaged while doing walking lunges.

First gym session after my shoulder injury.. I am unable to lift heavy weights & this is a good mental exercise of acceptance and making the most of it.. Keep going forward..👊 #OldSkool

Shikhar Dhawan has accepted in his post that due to shoulder injury he is not able to lift heavy weights, he thereby has chosen an alternative to working on his muscles and thereby keep himself fit. We as fans will wish for his quick recovery and hope to see him back on the field soon.