Shikhar Dhawan and Prithvi Shaw grooved on popular Bollywood track ‘Saat Samundar’ from 1992 film Vishwatma. While Shaw was playing the female part, Dhawan hilariously took off his T-Shirt before holding Shaw’s hands. The clip was nothing but hilarious as the comment action got flooded in no time. 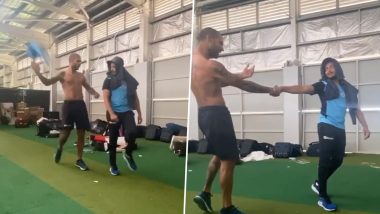 Shikhar Dhawan is back to his entertaining best in Australia as he recently shared a hilarious video with Prithvi Shaw. The two Indian openers performed on popular Bollywood track ‘Saat Samundar’ from 1992 film Vishwatma. While Shaw was playing the female part, Dhawan hilariously took off his T-Shirt before holding Shaw’s hands. The clip was nothing but hilarious as the comment action got flooded in no time. “Laila is still making me mad,” the 34-year-old captioned the picture with four laughing emoticons. Well, Dhawan is already known for his goofy and entertaining nature; it seems like Shaw isn’t far behind from his senior pro. Shikhar Dhawan’s Preparation in ‘Full Swing’ Ahead of ‘Important’ Tour.

Dhawan and Shaw – who played for Delhi Capitals in the recently concluded Indian Premier League (IPL) 2020 – indeed share a great bond. In fact, this isn’t the first time when their romance left fans in slits. Earlier in September, the two dashing openers grooved to another famous song famous track ‘Apun Bola Tu Meri Laila’ from 2000 Bollywood movie Josh. With Dhawan being only in the white-ball team and Shaw picked just for Test matches, the two openers will not join forces on the field in India’s upcoming series against Australia. However, they are all but likely to entertain fans with many more such videos. India Tour of Australia 2020-21 Schedule, Free PDF Download.

Here's The Clip Shared By Dhawan!!

Meanwhile, the full-fledged series comprises of three ODIs, three T20Is and four Test matches respectively, starting from November 27. Virat Kohli’s men must be high on confidence as they have pleasant memories from their last assignment down under.

While the T20I series ended in a 1-1 tie, India won the ODI and Test series 2-1. Nevertheless, they must not forget that Steve Smith and David Warner didn’t participate in that series. Hence, the competition will indeed be more challenging this time around.

(The above story first appeared on LatestLY on Nov 18, 2020 02:05 PM IST. For more news and updates on politics, world, sports, entertainment and lifestyle, log on to our website latestly.com).