Shoaib Akhtar Opens Up on Virat Kohli and Babar Azam Comparison, Says ‘The Debate Is Wrong’

"If Babar needs to beat Virat and surpass him, he will have to score more runs chasing and play the kind of innings Kohli has," the former legendary pacer said. 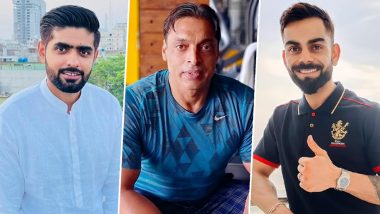 There has been a lot of comparisons doing the rounds involving Indian captain Virat Kohli and his Pakistani counterpart Babar Azam. Both are stellar batsmen. Both can play match-winning knocks. Both batsmen are star players on their own right. But former Pakistan captain Shoaib Akhtar has shrugged off a comparison between the two and stated that there's a lot of differences between the players.  Azam has developed an image of becoming one of the best young cricketers in the modern-day game and slowly climbed the ranks to draw comparisons with Kohli. India vs Pakistan At T20 World Cups: Top Five IND vs PAK Matches At ICC Twenty-20 Tournaments

Akhtar meanwhile felt that the 26-year old still had a lot to learn and grow.  "If Babar needs to beat Virat and surpass him, he will have to score more runs chasing and play the kind of innings Kohli has. There is no doubt that Babar Azam can probably be the greatest batsman of Pakistan, but it will take time. We will judge Kohli and Babar after 10 years where they stand," Akhtar, while talking to a news channel, said.

He also added that Azam, who is a relatively new cricketer as compared to Kohli, should absolutely learn to dominate the next few years in cricket to get the level of the Indian skipper. He also said that Kohli should get at least 30 more hundreds to outshine his idol, Sachin Tendulkar. He added, "Virat has what… 70 centuries in international cricket right. So in the next five years, he will get 30 more and I want him to get 120 centuries, or at least 110. See, with these many runs, who can be compared to him? The debate in itself is wrong. And Babar is now coming through. It’s really good that there is healthy competition."

(The above story first appeared on LatestLY on Jul 23, 2021 09:36 PM IST. For more news and updates on politics, world, sports, entertainment and lifestyle, log on to our website latestly.com).