SRH Playing XI in IPL 2020: 4 Overseas Players Who Could Feature in Sunrisers Hyderabad Line Up Throughout Dream11 Indian Premier League

SRH have been one of the most consistent sides in IPL in recent history and most of been has been down to the impact of their overseas players. The franchise boasts some heavyweights of the game such as David Warner, Jonny Bairstow, Kane Willaimson, Mohammad Nabi and Rashid Khan. 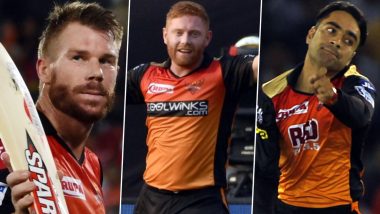 2016 champions Sunrisers Hyderabad will begin their IPL 2020 journey on September 21, 2020, when they take on Royal Challengers Bangalore in their opening encounter at the Dubai International Stadium. The franchise reinstated David Warner as captain for the upcoming season, the Australian will take over the duties from Kane Williamson, who captioned the side to the finals of the 2018 edition against Chennai Super Kings. SRH Squad for IPL 2020 in UAE: Check Updated Players' List of Sunrisers Hyderabad Team Led by David Warner for Indian Premier League Season 13.

SRH have been one of the most consistent sides in IPL in recent history and most of been has been down to the impact of their overseas players. The franchise boasts some heavyweights of the game such as David Warner, Jonny Bairstow, Kane Willaimson, Mohammad Nabi and Rashid Khan. However, with just four international players allowed in the starting XI, we take a look at the foreign stars who could be a regular feature in the SRH line-up. SRH Team Profile for IPL 2020: Sunrisers Hyderabad Squad in UAE, Stats & Records and Full List of Players Ahead of Indian Premier League Season 13.

The Australian will once again lead the franchise after being reinstated as the skipper. The 33-year-old will play at the top of the order for SRH and will be hoping to replicate the feat of 2016 when he led the team to their first-ever title. Warner is expected to miss the first few games as he was involved in international action against England

Much like skipper David Warner, Jonny Bairstow is also expected to miss the first couple of games of the season but is expected to slot in the starting XI after the completion of the quarantine period. The Englishman will open the batting for SRH and his partnership with Warner will be crucial if the team are to go far in the competition.

The Afghanistan all-rounder will once again be crucial for SRH in the middle overs of the game. Nabi has been an integral part of the SRH squad mover the years and will feature regularly this season as well. The 35-year-old has made important contributions with the bat as well as the ball for Hyderabad and will be hoping to continue that

The Afghanistan bowler will be an ever-present in the SRH line-up once again. Rashid Khan joined the franchise in 3017 and since then has taken 55 wickets in 46 games. The 21-year-old cricketer has been a game-changer for the team over the years and his ability to contribute runs down the order makes him indispensable.

These four overseas stars are expected to feature regularly in the Sunrisers Hyderabad playing XI but changes could be made if injuries and lack of form play a part. Former skipper Kane Willaimson will also be a crucial member of the squad but might mostly be used in rotation with other players due to the foreign player rule in the tournament.

(The above story first appeared on LatestLY on Sep 17, 2020 02:02 PM IST. For more news and updates on politics, world, sports, entertainment and lifestyle, log on to our website latestly.com).