SRH vs RCB Dream11 IPL 2020: Virat Kohli vs Rashid Khan & Other Exciting Mini-Battles to Watch Out for in Indian Premier League Match 3 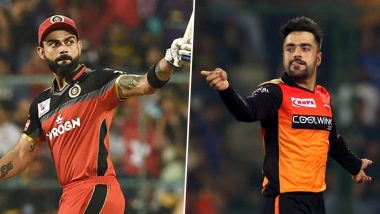 Sunrisers Hyderabad (SRH) will square off against Royal Challengers Bangalore (RCB) in Indian Premier League (IPL) 2020 match no 3. The game will be held at Dubai International Cricket Stadium on September 21, 2020. Sunrisers Hyderabad has won IPL 2016 under the captaincy of David Warner and this time too the orange army will be led by the Australian cricketer. RCB led by Virat Kohli has never won any of the IPL tournament, however, they have made it to the final thrice. Meanwhile, you have arrived at the right platform, if you are looking for SRH vs RCB Dream11 IPL 2020 exciting mini-battles which include Virat Kohli vs Rashid Khan and others. SRH Playing XI in IPL 2020: 4 Overseas Players Who Could Feature in Sunrisers Hyderabad Line Up Throughout Dream11 Indian Premier League.

Sunrisers Hyderabad and Royal Challengers Bangalore have faced each other on 16 occasions in IPL, in which the Orange Army has won eight times. Speaking about the last five encounters, RCB leads by 3-2. Both teams have the world's best batsman, bowlers and fielders. It will be interesting to see players like Virat Kohli, David Warner, Kane Williamson, AB de Villiers, Rashid Khan, Moeen Ali, Jonny Bairstow, Bhuvneshwar Kumar and others in action in SRH vs RCB, IPL 2020. Now let us take a look at some of the interesting mini-battles from the upcoming game of IPL 2020. SRH vs RCB Dream11 Team Prediction IPL 2020: Tips to Pick Best Fantasy Playing XI for Sunrisers Hyderabad vs Royal Challengers Bangalore Indian Premier League Season 13 Match 3.

We have seen Virat Kohli getting dismissed by Rashid Khan on few occasions in IPL. The RCB skipper sometimes fails to read the spinner length and ends up to choose a wrong shot. Virat Kohli is indeed a world-class player and Rashid Khan is the spinner in the T20 format. The battle between these two will be quite interesting in the upcoming game between RCB vs SRH, IPL 2020.

David Warner was the orange cap holder in IPL 2019 where he made 692 runs from 12 games. RCB will definitely want to get rid of him soon and Umesh Yadav who will most probably lead the pace attack of Bangalore can dismiss him with his tricky delivery. The green grass on the track at Dubai can help Umesh get the seam movement.

We are aware that Jonny Bairstow struggles against the spin attack and has had a problem against spinners on numerous occasion. The SRH batsman also had a great time in IPL 2019 where he made 445 runs from 10 games. RCB spinner Yuzvendra Chahal has a smart cricketing mind and he has all the ability to get rid of the English batsman.

SRH and RCB fans will be eagerly waiting to see their favourite players in action after a long time. The fate of the above-mentioned mini battles will definitely play a huge role in the final result of SRH vs RCB, IPL 2020 match no 3. Stay tuned with LatestLY for more updates and news from IPL 2020.

(The above story first appeared on LatestLY on Sep 21, 2020 08:01 AM IST. For more news and updates on politics, world, sports, entertainment and lifestyle, log on to our website latestly.com).