This match would be a clash between two bottom-placed sides and a win for either side would give them the impetus to finish the tournament on a high. Check out the weather and pitch report for this match. 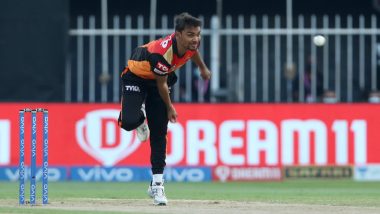 Sunrisers Hyderabad would aim to add some sort of substance to their struggling campaign when they face Rajasthan Royals in match 40 of IPL 2021 on Monday, September 27. The match would be played at the Dubai International Cricket Stadium. Rajasthan managed to steal a win thanks to Kartik Tyagi's heroics in the last over against Punjab Kings in the first match since IPL resumed on September 19. But their weaknesses were left exposed by a dominant Delhi Capitals outfit and as a result, they now find themselves in the seventh place, one ahead of their opponents on Monday. SRH vs RR Dream11 Team Prediction IPL 2021: Tips To Pick Best Fantasy Playing XI for Sunrisers Hyderabad vs Rajasthan Royals Indian Premier League Season 14 Match 40

Sunrisers on the other hand, are very much on the same plane as Rajasthan and are yet to add to their tally of just one win this season. They have been outplayed badly in both the matches they have played. While they were beaten comprehensively by Delhi in their first match, the 2016 champs had a golden chance to return back to winning ways after they had restricted Punjab Kings to just 125 runs. They fell just five runs short and now, they are out of the race for making it to the playoffs. IPL 2021 Points Table Updated 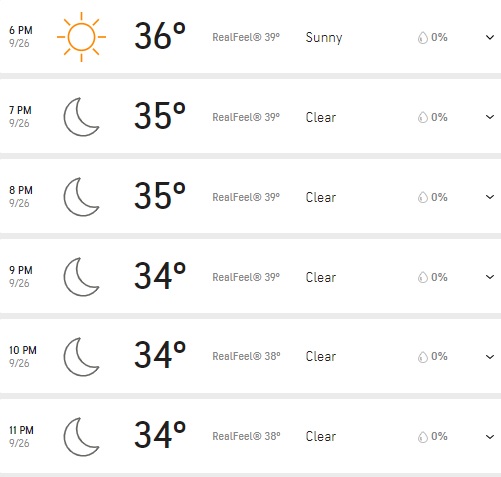 Expected weather in Dubai at the time of the SRH vs RR clash (Source; Accuweather)

The pitch at the Dubai International Cricket Stadium is expected to be a surface where batting would not be difficult once a batsman gets his eye in. A total of 160-170 runs would be quite a challenging one as bowlers might not find it easy to hit the right lengths towards the death.

(The above story first appeared on LatestLY on Sep 26, 2021 05:29 PM IST. For more news and updates on politics, world, sports, entertainment and lifestyle, log on to our website latestly.com).