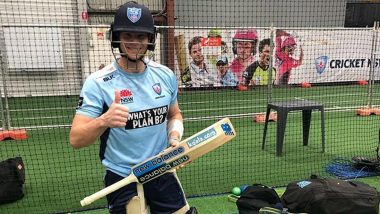 As cricket boards all around the world are planning to resume action after COVID-19 break, many players have also resumed training to get in the groove again as soon as possible. Recently, Australian batting great Steve Smith also took to his official Instagram account and shared a picture from his recent net session. The top-ranked Test batsman, who played his last international match in March, expressed his delight to hit the nets again as he can be seen smiling in the picture. The right-handed batsman also jokingly said that he’s happy about the fact that he still remembers how to hold a bat. Steve Smith Wishes Happy Birthday to ‘Strangest Bloke’ Marnus Labuschagne As the Latter Turns 26.

“First hit in the nets in 3 months. Good news... I remembered how to hold the bat,” read the caption of Smith’s latest click on the picture-sharing website. The comment section of the post got filled in a jiffy as fans can’t wait to see the Aussie stalwart in action again. Meanwhile, have a look at the post.

First hit in the nets in 3 months. Good news... I remembered how to hold the bat 😂

Well, fans might be expecting the return of the cricket soon. However, it seems like Smith’s teammate Usman Khawaja believes that the game will continue to be on a halt for quite some more time. “You will forget again at some point no doubt,” wrote the left-handed batsman in the comment action.

Meanwhile, Australia are scheduled to get back in action with the three-match ODI series against Zimbabwe starting from August 9. However, the squads for the series haven’t been announced and it will be interesting to see the fate of the fixture.

(The above story first appeared on LatestLY on Jun 29, 2020 07:41 PM IST. For more news and updates on politics, world, sports, entertainment and lifestyle, log on to our website latestly.com).