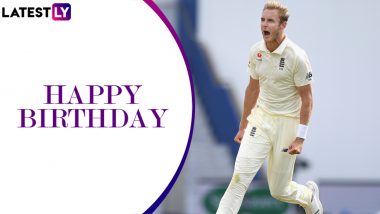 One of the very best bowlers of his generation, Stuart Broad celebrates his 34th birthday on June 24, 2020 (Wednesday). The England cricketer currently plays for the national team in the Test format but has captained his country in T20Is and One Day internationals as well. The speedster is the son of former England batsman, Chris Broad, and is one of the highest wicket-taker for his country in all the three formats of the game. Stuart Broad Resumes Training at Trent Bridge Cricket Ground After Relaxation in COVID-19 Lockdown Restrictions (Watch Video).

Born in Nottingham England, Stuart Broad began his playing career at Leicestershire and made his debut for them before his 18th birthday. Broad made his debut for England in an ODI game against Pakistan and the following year made his Test debut as well against Sri Lanka. The speedster is an aggressive bowler with an ability to produce bounce from even the flattest surfaces. So on his birthday, we take a look at some lesser-known facts about him.

(The above story first appeared on LatestLY on Jun 24, 2020 10:00 AM IST. For more news and updates on politics, world, sports, entertainment and lifestyle, log on to our website latestly.com).