‘Thought It Was a Joke’: Luke Wright Recalls Getting Phone Call From Sachin Tendulkar to Play for Mumbai Indians 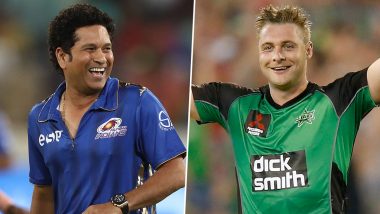 England all-rounder Luke Wright recently revealed that Sachin Tendulkar offered him to play for Mumbai Indians (MI) in the inaugural edition of the Indian Premier League (IPL). However, the dasher couldn’t play for the Master Blaster-led side due to the then restrictions of the England Cricket Board (ECB). Wright recalled that Tendulkar gave a phone call to him to talk about his participation. However, the all-rounder couldn’t digest the fact and thought it’s a joke or prank made by some of his teammates. Shoaib Akhtar Recalls Troubling Sachin Tendulkar During India vs Pakistan Faisalabad Test in 2006.

Back in 2008, the participation of England players in the IPL wasn't quite smooth. Hence, Wright had to let go of the offer which he still regrets. According to the veteran cricketer, the experience of playing in T20 leagues like IPL before making international debut would have helped him to become a better player.

“If I had been able to have the experience with these franchises and different leagues before playing for England, which a lot of the players are doing either during or before, now, is such an advantage,” Wright said on Wisden and CricViz’s The Greatest T20 podcast.

Remembering the phone call from Tendulkar, Wright said: “I remember missing out on one of the IPLs actually. I thought it was a joke – Sachin Tendulkar rang me to go and play for the Mumbai Indians in one of the first IPLs, and I obviously thought it was the lads taking the mick.”

Wright eventually got a chance to make his IPL debut in 2012 where he played for the now-defunct Pune Warriors India (PWI). He played for the franchise for the two seasons. Wright then plied his trade in various T20 leagues like the Big Bash League (BBL) and Caribbean Premier League (CPL).

(The above story first appeared on LatestLY on May 28, 2020 10:18 PM IST. For more news and updates on politics, world, sports, entertainment and lifestyle, log on to our website latestly.com).