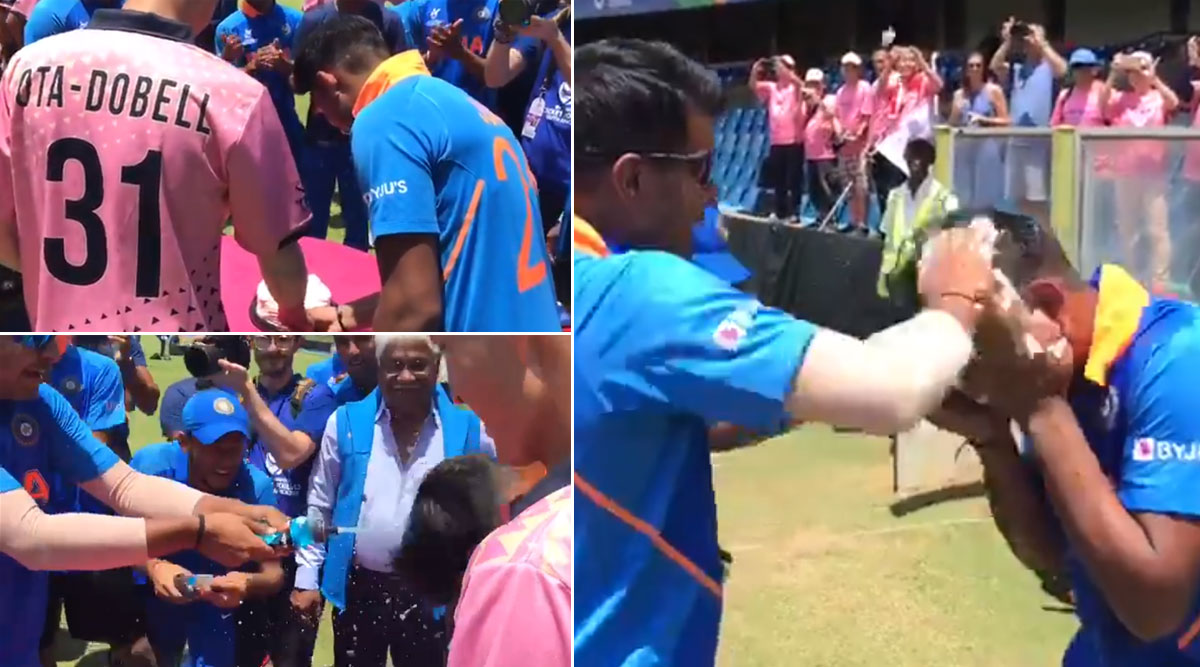 India and Japan Under-19 cricket teams’ gesture of friendship and togetherness won hearts on the internet after a video of both teams celebrating the birthdays of their teammates (Dhruv Jurel and Kento Ota-Dobell) following their match in 2020 ICC U19 Cricket World Cup went viral. India thrashed Japan U19 by 10 wickets after bowling them out for a joint second-lowest score in ICC U19 Cricket World Cup history. The win helped the defending champions extend their winning streak and further consolidate their position as leaders in Group A following successive wins over Sri Lanka and Japan U19 teams in their opening two games of 2020 ICC U19 World Cup. Rakibul Hasan Takes First Hat-Trick of ICC Under-19 Cricket World Cup 2020.

A video shared by the official twitter account U19 Cricket World Cup showed both India and Japan gathered in a huddle and celebrating Dhruv Jurel and Kento Ota-Dobell’s birthday hours after India’s 10-wicket victory over the same opposition. Both the teams huddled around a table and celebrated Dhruv and Kento’s birthday before the Indian teammates smash chunks of the cake on Dhruv’s face. Some of the players even can also be seen chasing Ota-Dobell for smashing cake on his face. The friendship and bond of both the young teams won plenty of hearts on the internet. ICC U19 Cricket World Cup 2020 Points Table.

I absolutely love this game more then anything else❤

Great feel... world need love and Friendship...but some Leaders spread us, ..... keep rocking as like....

Happy birthday to them both❤🏏

Meanwhile, India bundled Japan for just 41 runs in their second Group A encounter. Japan, who at one stage were reeling at 17/7 finished with 41 on the scoreboard after a little help from the wayward Indian bowlers – who bowled 12 wides and gave away 17 extra runs. Japan equalled Canada and Bangladesh’s records for second-lowest score in ICC U19 World Cup history. Scotland, who were bundled for just 22 runs against England in 2004, holds the record for lowest runs scored in an innings by any team batting first at ICC U19 World Cup.

India, four-time winners of the competition, next play New Zealand U19 on January 24, 2020, while Japan faces Sri Lanka U19 in their 3rd match on the next day. India lead Group A with 4 points, Japan have 1 from matches.