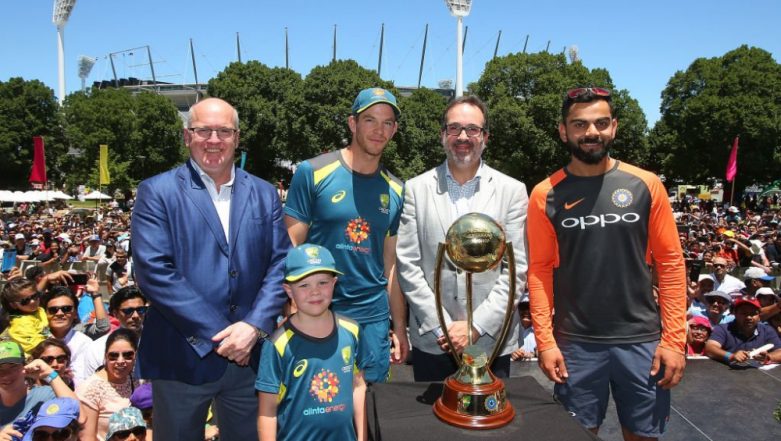 Virat Kohli and Tim Paine pose with the Border-Gavaskar trophy at the Indian Summer Festival in Melbourne. (Photo: @BCCI/Twitter)

During the second Test at Perth Indian captain Virat Kohli and his Australian counterpart Tim Paine were seen sledging each other. At the end of the Test match, the two captains exchanged a handshake and moved ahead. Now ahead of the third Test at the Melbourne Cricket Ground (MCG), which starts on the Boxing Day, the two captains came together for an event. Both Kohli and Paine were seen posing with the Border-Gavaskar trophy at the Indian Summer Festival in Melbourne on Sunday.

Fans thronged the Yarra Park to see their favourite cricketers. The Indian summer Festival is a three-day event organised jointly by the Victorian government and Cricket Australia (CA). The opening day was reserved for the appearances made by Australian and Indian cricketers. Ravichandran Ashwin Remains Doubtful for Third Test Against Australia at Melbourne, Says Ravi Shastri.

Fans thronged Yarra Park for the grand Indian Summer Festival happening in Melbourne. The two captains pose with the Border-Gavaskar trophy at the event #AUSvIND pic.twitter.com/BkY2Kd0l2O

“People love their cricket here and the atmosphere on the Boxing Day is going to be amazing,” Kohli said during the event as both the teams enjoyed some Indian dance and music. Hardik Pandya Clicks 'Best Selfie Ever' Ahead of Ind vs Aus Boxing Day Test at MCG.

Ahead of the Boxing Day Test, the two squads mingled with fans on @BupaAustralia family day during the Indian Summer Festival #AUSvIND pic.twitter.com/5qlxhSSRKA

Meanwhile, the four-match Test series between India and Australia is currently locked at one each. India won the opening Test at Adelaide by 31 runs and then Australia bounced back in style to draw level in the series with a 146-run victory at Perth. Both the teams will now be looking to secure a win at MCG and take a 2-1 lead in the series.