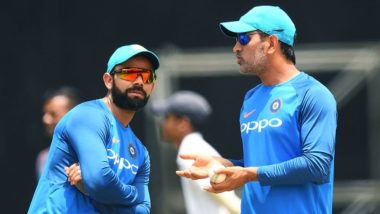 After winning the three games from five ODIs, Team India has lost the fourth match at Hamilton. Rohit Sharma and men got bundled out on the score of 92 runs. Only Hardik Pandya was the one who had the highest score of 16 runs. It was Trent Boult who snapped five wickets and destroyed the Indian batting lineup. The opponents achieved the target in 14 overs. Post this humiliating defeat, the netizens posted MS Dhoni and Virat Kohli memes. 'Loss in Fourth ODI is a Reality Check for Us', Bhuvneshwar Kumar.

Kohli is on a holiday as he has been rested for the remaining part of the series. MS Dhoni also missed out on the fourth match as well due to a sore hamstring. “MS Dhoni is still not fit,” Sharma was quoted as saying. Now as the Indians lost the game, naturally this angered the netizens and they posted memes which obviously took a jibe at the Indian team. Check them out below. Rohit Sharma Says 4th ODI Against New Zealand was One of the Worst Performances.

Indeed they missed Kohli too! And about... who said that!

Because everyone knows it's Dhoni who stands there when team collapse. #dhoni #NZvInd pic.twitter.com/b9FvdIyirg

In the absence of Virat Kohli and MS Dhoni, New Zealand roll India over to win by 8 wickets and win their first game of the ODI series.

😜😜 but #India can do anything

This netizen used a film poster.

After the match, Rohit Sharma said, “You have to give credit to the New Zealand bowlers. There is something to learn for us, when conditions are not easy what to do as a batting unit. You need to grind it out at time but we failed to do that today. I don't think it was a bad wicket. It was a great wicket to bat on once you are in. But we failed to do that. We didn't apply ourselves. It's always challenging when the ball is swinging.”

(The above story first appeared on LatestLY on Jan 31, 2019 05:20 PM IST. For more news and updates on politics, world, sports, entertainment and lifestyle, log on to our website latestly.com).