AC Milan vs Atalanta, Serie A 2019–20 Free Live Streaming Online & Match Time in IST: How to Get Live Telecast on TV & Football Score Updates in India? 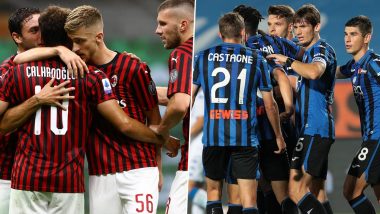 AC Milan vs Atalanta, Serie A 2019-20 Live Telecast and Free Live Streaming Online in IST:  AC Milan will eye a fourth straight win when they host a second-placed Atalanta in their next Serie A 2019-20 fixture on Friday. Both Milan and Atalanta are unbeaten in their last 10 matches and have not lost a game since football resumed in Italy last month. But Milan have won seven and drew three of the 10 games, including Coppa Italia semi-final against Juventus, they have played while Atalanta have won eight of their 10 matches. AC Milan vs Atalanta Dream11 Prediction in Serie A 2019–20.

Atalanta are ranked second in the Serie A 2019-20 points table with 74 points from 35 matches. They are six behind table leaders Juventus, who surprisingly lost 1-2 to Udinese in their previous league match. A win will help them close down the six-point gap at the top of the points table and with three games yet to be played Atalanta could challenge Juventus for the title with some favourable results. AC Milan are placed sixth with 59 points from 35 games and can jump to fifth with a win against Atalanta. AC Milan Reportedly Opens Door For Renewing Contract of Zlatan Ibrahimovic.

When is AC Milan vs Atalanta, Serie A 2019-20 Football Match? Know Date, Time and Venue

AC Milan vs Atalanta match in Serie A 2019-20 will take place on July 24, 2020 (Friday midnight). The match will be played at the San Siro Stadium and it has a scheduled start time of 01:15 am IST (Indian Standard Time).

Fans can follow the live action of AC Milan vs Atalanta match on Sony Sports channels. Sony Pictures Sports Network is the official broadcaster for Serie A 2019-20 in India. Fans need to switch to Sony Ten 1, Sony Ten 1 HD, Sony Ten 2 and Sony Ten 2 HD channels to live telecast the match on their television sets.

Where to Get Free Live Streaming Online of AC Milan vs Atalanta, Serie A 2019-20 Football Match?

Live streaming of the match will be available on SonyLiv, the OTT of Sony Pictures Network. Fans can watch it live either on the SonyLiv app or on the website.

(The above story first appeared on LatestLY on Jul 24, 2020 04:49 PM IST. For more news and updates on politics, world, sports, entertainment and lifestyle, log on to our website latestly.com).