AC Milan vs Atalanta, Serie A 2019-20: Zlatan Ibrahimovic, Alejandro Gomez and Other Players to Watch Out in MIL vs ATN Football Match 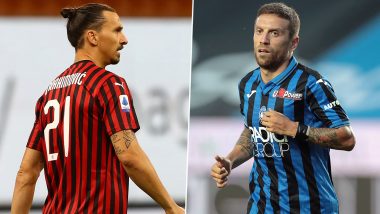 AC Milan will take on title-chasing Atalanta at the San Siro Stadium in the latest round of Serie A 2019-20 fixtures. Both the sides are two of the most inform and free-scoring teams in the Italian league at the moment and the clash is expected to be a high-scoring encounter. Guan Piero Gasperini’s team are second in the team standings at the moment while Stefano Pioli’s team occupy the sixth position. AC Milan vs Atalanta, Serie A 2019–20 Free Live Streaming Online & Match Time in IST.

AC Milan are on a great run since football’s restart from coronavirus enforced suspension which has seen them get back into contention for Europa League qualification. A win tonight will see them overtake AS Roma in fifth and put some daylight between them and the chasing pack. This is the last game, Milan will play against a top-10 side, so a win will all but guarantee them a place for continental competition next season. MIL vs ATN Dream11 Prediction in Serie A 2019–20.

Meanwhile, Atalanta find themselves in a unique position as a victory against the Rossoneri’s will see them go within three points of leaders Juventus. Maurizio Sarri’s men have won just once in their last five games and with two tough games still left, the records champions could easily slip up once again. Gasperini’s team will take that as a much-needed confidence boost to get all three points from this game.

Both teams have some quality players in their ranks who could easily change to match at any govern moment. So ahead of this important clash, we take a look at some of the players who could have a huge say on the final outcome of the game.

The Swedish striker has been brilliant since his return from injury. In the game against Sassuolo, Ibrahimovic ended his three-game goal drought as the 38-year-old’s brace helped Milan continue their unbeaten run.

The Argentine playmaker has been one of the most important players for Atalanta this season. The 32-year-old has been involved in 22 league goals, assisting 16 of them. His creative ability will be crucial for Gasperini’s team if they are to get the better of Milan and all three points from the game.

The Serbian has been in impeccable form post lockdown but his goals have dried up in recent weeks. Rebic hasn’t scored in his last four games and will be eager to break that run. The 26-year-old’s combination play with Ibrahimovic will be important if Milan are to break one of the resolute defences in the league.

The Columbian has been one of the leading goal-scorers in the league this season but most of his impact has been while coming from the bench. The 29-year-old wasn’t named in the starting line-up against Bologna but scored the winner to keep Atalanta’s fairytale run going and will be hoping to make a similar kind of impression in this game as well.

(The above story first appeared on LatestLY on Jul 24, 2020 08:51 PM IST. For more news and updates on politics, world, sports, entertainment and lifestyle, log on to our website latestly.com).